Armbar From Guard: An Attacking Perspective

29.11.2020 by Bojan
Table of Contents show
1 A Concept On Attacking From The Guard
2 How To Do An Armbar From Guard
3 Getting On Top
4 Conclusion

The armbar from guard is one of the first things you learn in Jiu Jitsu. Personally, I argue against it, and think it should be taught later on. that said, an armbar s should be among the first submissions you learn about, given that it is statistically the highest percentage move in Brazilian Jiu Jitsu ever! Let’s talk more about it and setting it up from the guard.

A Concept On Attacking From The Guard

I remember the first time I’d gotten a taste of Jiu-Jitsu. It was the armbar from the closed guard. I was thinking ‘This is never going to work’. Imagine my surprise and the sensation of not being able to move with my elbow gradually popping. It turns out that the armbar from guard not just works, but does so like a charm!

Attacking from the guard, whether r it is closed or open guard, though, is a very interesting thing in Jiu Jitsu. The guard offers only two offensive options: sweep or submit. The people playing the guard know it, and the people attacking it know it. And yet, we keep pulling off the moves from there. How come?

Well, it is the guard. If you can maintain it, you can really do wonders with it. An armbar from guard is nothing short of miraculous, really, You’re on your back and if you play your cards right you can completely dislocate the elbow of the top person even though they have the ability to (seemingly) move in any direction.

However, if you want a world-class gaurd, offensively speaking, you’ll need to think beyond just single moves. The formula here is so-called “dilemma attacks”: pair up a sweep and submission and you’ll see how much easier each of them actually becomes. Then you’ll start creating attacking chains of dilemmas instead of moves, to further ensure you get what you want. 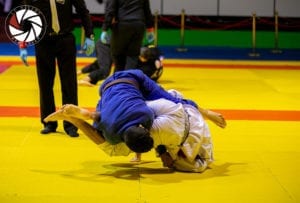 How To Do An Armbar From Guard

The armbar from guard will work from a variety of different guards. however, for the sake of simplicity, I’ll use the closed gaurd as the launching pad for the straight armbar in this article. It is not just other guards that allow for different armbars, but the closed guard can actually provide you with different arm locking options as well.

Attacking the armbar off your back demands that you move. You can’t do it statically, and unlike chokes from the closed guard, you’ll have to open the gaur and move your hips, which in turn demands hip mobility. That is where those armbar drills come into play and I can’t stress enough how important they are.

The one thing to remember about the armbar from gaurd si that it has too many steps. When is the last time you actually pulled off a BJJ move that has 6 or more steps? That means that gripping, then opening the legs, positioning the hips, swinging one leg, re-adjusting and all that jazz goes straight out of the window. At least if you truly want to finish an armbar.

First of all, you need to know the principles that make an armbar work: you need control over two neighboring joints. That means you need to control the shoulder (with your legs) and the wrist (with your arms). Moreover getting an armbar from guard shouldn’t take more than two steps, and they should be able to flow together making it seem like one simple and direct motion.

The way you set up an armbar is by gripping the triceps of the arm you’ll look to attack with a cross grip. The sole reason for it is to ensure the elbow stays across your body when you move. Then, you need to put all those armbar drills to work, and swing your hips in one motion, “biting” down on the shoulder with your thighs and landing straight into an armbar finishing position. Grip the wrist and you’re done.

Finally, if you want to be thinking like a black belt, you won’t just expect people to tap from there. You’ll expect them to defend, counter, and try to stop you in any way imaginable. It also means that you’ll see an armbar from gaurd not just as a submission option, but also as a sweeping opportunity. Moreover, you will look so far ahead that you’ll be expecting to finish the armbar after sweeping.

If you’ve played your cards right, an armbar from guard will open up plenty of opportunities for you. For example, you’ll be able to get a tap. However, if you lose an armbar from guard, then you’ll not just lose the submission, but also the guard, leaving you vulnerable to passes. That is why you need to try and finish as many submissions as you can from top positions.

The armbar p[ositon from the bottom also doubles as a perfect sweeping opportunity. Since you have the arm stuck, there’ no post on that side. Even more so, you have a way to pressure the opponent to that side by looking to finish the submissions. All this adds up to an easy way of putting people on their back as they try to avoid a tap.

WHat most people don’t know is that they’ll only land in a worse position for finishing an armbar. When you’re looking for a submission from a top position, you have a lot more options to adjust. Even if things go wrong, you’ll just go to mount and you can go look for another armbar when you see it fit.

An armbar from guard doesn’t have to bring you a tap right then and there. If it does, perfect,. Hwoever, it would be ideal if it leads to a top position for you, and finish from there. Remember, the guard offers you the option to set the armbar up, but that doesn’t restrict finishing it to that position only. Think ahead, use dilemma attacks, and your armbar from guard is going to become a lot more efficient!