The 3 Best BJJ No Gi Techniques

When it comes to the never-ending BJJ vs. No Gi debate, there are those who argue that they are entirely different, those that argue that they are basically the same thing, and the more moderate camp that say that while they share more similarities and skill crossovers than not, there are still some significant differences. Over here, we fall from the last camp, and in this article we will go over the best BJJ No Gi Techniques.

Now, before we get into a semantics debate, our readers should understand that our definition of ‘best’ is mainly defined as the ‘Highest Percentage BJJ No Gi Techniques that are not found or rarely found in the gi’. We just thought that that title was excessively long and wordy. Let’s get right to it. 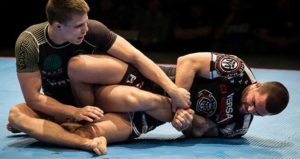 There’s no denying it, topping of our list, and coming under the ‘Banned’ category is the almighty heel hook. While the heel hook has always been a staple in no gi tournaments since the first ADCC no gi submission wrestling championships to smaller regional tournaments such as NAGA (where they are legal in all no-gi divisions) and Grappler’s Quest, they have exploded in popularity recently with the event of more professional no gi submission wrestling events such as the Eddie Bravo Invitational, Polaris Invitational and the smaller tournaments such as the Sapateiro Invitational.

Make no mistake, heel hooks are popular for a reason; they’re devastatingly effective. The Danaher Death Squad in particular has been on absolute tear with them, with Gordon Ryan submitting Keenan Cornelius for the first time ever in a no time limit submission only tournament via an inverted heel hook.

The Hard to Hit 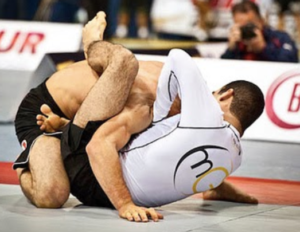 While the guillotine is definitely not banned in the gi, they are very hard to hit simply because the friction of the gi makes the process of connecting the hands underneath the opponent’s chin a monumentally more difficult task when compared to a slippery no-gi scenario. For a simple example, we can take a look at the guillotine master himself: Marcelo Garcia, who has submitted many opponents in the ADCC no gi submission wrestling championships with his signature ‘Marcelotine’, but not in the gi tournaments, where he has been no less dominant.

Rounding off our Top 3 list is the ever popular D’arce choke, a staple of many BJJ players such as Jeff Glover, Ryan Hall, Joel Tudor, Bill Cooper, and Edwin Najmi; just to name a few. Again the friction of the gi makes the application of the choke much harder; as it involves shooting your arm underneath your opponent’s armpit, across their chest and then around the back of their head, you can see why the gi friction from your own sleeve plus the opponent’s gi can make it that much more difficult. And while the d’arce is a choke you are sure to see at every  BJJ no gi tournament and very rarely at gi ones, we should give a shout out to Edwin Najmi who recently submitted Bill Cooper, a D’arce master himself, via a D’arce choke in the gi at a Five Grappling event.