The Top 5 Things Not To Do When Training BJJ

One of the most common questions people have when considering signing up to their local BJJ gym is what NOT to do when training BJJ. This is of course, perfectly understandable; who wants a new experience to consist of standing out from the crowd in an unfavorable way? That’s right – no one.

Don’t Be ‘That Guy’ When Training BJJ

Every gym has ‘that guy’. Who is ‘that guy’, you ask? Well, he’s the person who people roll with only as an option of last resort (such as their coach forcing them to). Rolling with him will almost certainly be an unpleasant experience, for one reason or another. Because of this, he will often not make any good friends in the academy, thus missing out on one of the best side benefits you can get from training in BJJ.

So, as a favor to everybody out there, we have put together a list of things NOT to do when training in BJJ. Read this list; thank us later, and more importantly, if you are guilty of any of these things – STOP IMMEDIATELY.

5 Things to Avoid Becoming ‘That Guy’ at Your Academy

#1: Avoid coming to class with a smelly Gi 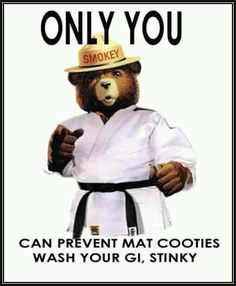 This should be self-evident, right? After all, if you’re going to be grinding against each other for the duration of the class, it’s just basic courtesy. And yet you’d be surprised how many people break this rule. The worst is the guy who leaves a dirty gi in his trunk and then decides to reuse it after a giving it a few sprays of Febreeze. That will ABSOLUTELY not work.

Here’s another self-evident rule that people often break while training BJJ. The unfortunate reality is that more often than not you will come out of class with micro cuts all over your hands, ankles, feet, and sometimes face. And those cuts get infected easily too. The least you can do is not be part of the problem.

We won’t go into too much detail on this one.  Yes, sometimes you will fart when rolling. Or your partner will. This happens, get over it. But don’t be a jerk and try to minimize this by watching what you eat before you begin training BJJ.

There’s a big difference between going hard and spazzing. Unfortunately, most people only learn the difference through mat time and repeated smashings. If you’ve picked up a reputation as a spaz, particularly if you are already big and strong, then it might be time to check yourself before you get wrecked.

Oh my gosh did you know that I tapped out that purple belt the other day? Great, you got lucky; don’t brag and don’t gossip. Sure, maybe you are legitimately better than that higher ranking belt; that’s not even uncommon nowadays. Still, how would you like it if you got wrecked by a lower belt and he spread it all around town?

Be A Good Training Partner

And now, armed with these tips on what not to do, you can resume your training in BJJ as a new and improved training partner!