Last updated on 25.02.2019 by Jiu Jitsu Legacy
Table of Contents show
1 The Introduction of the Art of Brazilian Jiu-Jitsu into the American Mainstream
1.1 Before Starting BJJ, You Should Know These 3 Things
1.1.1 #1 The Gi is more than just a uniform
1.1.2 #2 You may or may not train with strikes
1.1.3 #3 Self-defense may not even be a priority
1.2 Conclusion: Every School Is Different

The art of Brazilian Jiu-Jitsu or BJJ was popularized by Royce Gracie in the early 1990s through the Ultimate Fighting Championships. Back then, the rules were much looser compared to what we see now; groin strikes were allowed, and it was truly No Holds Barred fighting. Of course, as we all know, Royce handily defeated all of his much larger opponents, and BJJ was introduced into the mainstream.

Nowadays BJJ has much evolved and it is as much a combat sport in its own right, quite distinct from its No Holds Barred and even earlier self-defense roots. In this article, we will look at the top 3 things you should know about the art of Brazilian Jiu-Jitsu.

Before Starting BJJ, You Should Know These 3 Things

#1 The Gi is more than just a uniform

In most other traditional martial arts, such as taekwondo or karate, the gi is just a uniform that the students wear. By contrast, the gi in the art of BJJ is more like in Judo – it is not just a uniform, but it is a handle that you must learn to use to manipulate your opponent’s body. In fact, the use of the gi in BJJ is far more intricate and complex compared to that in Judo – as you will soon discover should you stick with BJJ long enough.

#2 You may or may not train with strikes

Striking in the art of BJJ? Yes, it happens (and should happen). And while you will not see any striking in 99% of grappling competitions, that doesn’t mean you shouldn’t occasionally glove up and train with some strikes to really see how your grappling stacks up in the ‘real world’. Whether or not you will end up training with strikes is highly dependent on which school you go to.

Generally speaking, a more BJJ gym that also offers MMA classes will usually be more amenable to this practice, as opposed to a more competition-oriented one. We must also give a shout out to Eddie Bravo, who will be implementing a Combat Jiu-Jitsu additional ruleset at EBI 11 which will allow open hand strikes during the ground grappling portion.

#3 Self-defense may not even be a priority 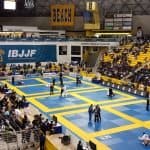 Of course, there are also schools that give equal representation to both the self-defense and competition aspect. These schools are rare, but a gem if you can find them (and if that’s what you’re looking for). Anecdotally, the Gracie Humaita chain of schools are quite well known for being competent at both aspects.

Conclusion: Every School Is Different