Belt whipping, the gauntlet or poledor colones (Polish corridor) in Portuguese is a ‘’tradition’’ in BJJ which originated during the 1990’s. Chris Haueter is said to be the creator of the belt whipping ritual. The ritual represents something of an initiation after a b

elt promotion. Members of a particular academy line up and get to take a shot at the newly promoted person by whipping their body with their belts. If you have ever watched a whipping you would know it is not very pleasant. The person being whipped enjoys it even less. There is an issue when it comes to whipping. People do not like it! Belt whipping has not been around for very long, but initiations into a particular group, tribe, clan etc. have been. Many of these initiations required proving physical and mental strength. In the martial arts realm initiations also existed and till this day they still do. Academies can definitely be more creative when it comes to creating initiation methods. Let’s look at a suggestion.

This is one of the most violent forms of karate created in Japan. It is full contact karate that allows punches and kicks to the body and forbids head strikes with the hands. Knees and kicks to the head, however, are allowed. Kyokushin just like Jiu-jitsu also has a belt system. In their testing process for different belt levels Kyokushin schools expect students to have an understanding of the techniques and an ability to perform them. Remind you of BJJ? The final test is a timed Kumite (Sparring). Future promotees must show various qualities during the kumite which are being judged, if they want to advance to a higher rank. Some of the qualities are composure, readiness, and attitude. The qualities are determined by the rank. 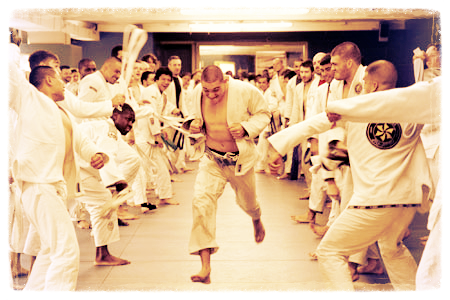 Kumite (sparring) after a BJJ belt promotion could be a great way to test someone, but also to consider it their initiation. The one up for promotion would have to spar against each person in the academy for a set number of rounds and time. How grueling the sparring session is will depend on the person’s rank. Also, during the sparring session, the person being promoted has  to show an understanding of the techniques suitable for their particular belt level. An environment like this creates camaraderie, mental support, and a bond between members. Whipping people does not represent either of those qualities.

Refusing to get whipped at a promotion does not make someone less of a man or woman. Never give into the peer pressure at that moment. Students should stand their ground and remind everyone that real Jiu-jitsu is about respect, and having the ‘’cojones’’ to speak up when something is wrong. Jiu-jitsu academies have members of different backgrounds and age groups. A twenty-year-old should not feel good for whipping someone twice his age. Don’t confuse the Jiu-jitsu academy with the second platoon from the movie Full Metal Jacket. No black belt instructor should allow this type of behavior. There are other more productive ways to initiate a person. Initiations are great and they should not be easy or moronic.