You’ve probably noticed that most of the celebrities look really good and fit. This is mostly because their job depends on this. So, they try really hard to stay fit and healthy. What you probably didn’t know is that the latest trend in celebrity fitness is Brazilian Jiu Jitsu and there are plenty of singers, actors, and athletes who train this fighting skill. Knowing this, we decided to compose a list of famous BJJ practitioners. However, the list tends to get quite long, so we made part one and two of famous faces training BJJ.

Ashiko Westguard, the Canadian actress, and model is training with AJ Agazarm. It has been claimed that Ashiko knows how to triangle choke anyone.

Millie, the English actress and model known for the TV Show Stranger Things, is a black belt. What’s more, she has been awarded her 2nd stripe at Phoenix MMA by her instructor Trevor, who is a black belt under the famous Terere.

This famous TV personality was a blue belt under Igor Gracie and an IBJJF gold medalist. He was probably the hottest topic in the BJJ world. Anthony won his division at the IBJJF New York Open and regularly trained at Renzo’s academy with his wife Ottavia. 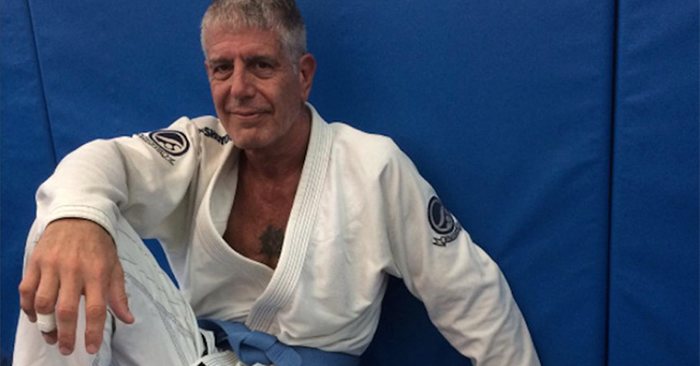 This famous actor definitely deserves a place on this list. In fact, he’s a long-time student under the legendary Royce Gracie.

This is one of the highest-ranking BJJ celebrity and a 2nd-degree black belt. This drummer has been part of various tournaments, such as Pan Americans in 2010. Moreover, he trains under Renato Magno at Street Sports Brazilian Jiu-Jitsu. He’s an avid student since 1998 and really knows how to roll on the mat.

Jenna Marbles, the famous YouTube personality, has even a popular video featuring her and her blue belt boyfriend training BJJ. Hence, lots of young people are influenced and inspired to take up this sport.

Russell Brand, the English comedian, actor, and activist has long been a fan of BJJ. Furthermore, he started training it and even mentioned that in one of the best JRE podcasts.

This amazing standup comedian and UFC commentator is a 10th Planet black belt. Moreover, he trains under his best friend Eddie Bravo and hosts his own podcast regularly featuring MMA and BJJ stars.

This famous actress, known for the 90’s version of Beverly Hills, has donned the Gi under Jean Jacques Machado. Likewise, her children are also training under the Machados.

This famous American actor and producer is a purple belt and regularly competes in local tournaments and the IBJJF competition. What you probably didn’t know is that his family is actually involved in MMA owning an MMA promotion. What’s more, Jonathan’s mum is a blue belt.

This American actor is a black belt in BJJ under Renato Magno of Street Sports BJJ. In fact, he was a brown belt for 2 years under Magno. He claimed that BJJ helps him relax from his hectic life.

You might be surprised to read that the famous Jim Carrey is on this list. He is actually a brown belt under Royce Gracie. Moreover, he was seen training in the Jorge Gurgel’s MMA gym.

The British-Chinese musician, Herman Li, is a purple belt in BJJ and was a judo black belt before. Likewise, he was training with Zoltan Bathory and still takes mats when being on tour.

This popular actor became a hot topic in the BJJ world a few years ago after his appearance in pictures with Rigan Machado. Ashton was a college wrestler and he is now a passionate devotee to the art of Brazilian Jiu-Jitsu. 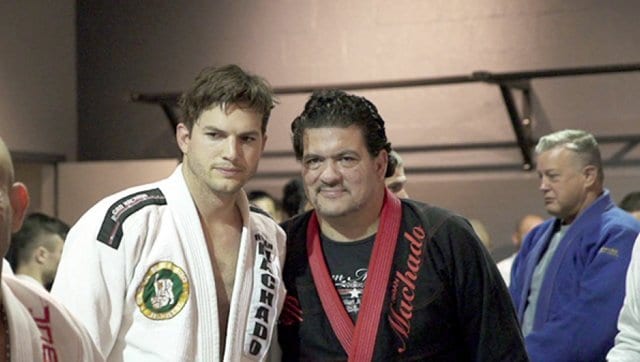 It is believed that this English actress and producer is training Brazilian Jiu-Jitsu. Moreover, he does Judo and has competed at the World Amateur Championships. She scares a lot of people on the mat.

Ricardo “Franjinha” Miller Spencer’s student, Spenser Pratt, is a brown belt. He even wanted to do a Metamoris match with Ashton Kutcher back in 2014.

Theo Rossi, the American actor and producer, is a widely known BJJ practitioner and currently trains with Royce Gracie.

This American actor, comedian and producer is an MMA and BJJ practitioner. What’s more, he even trained with Romulo Barral.

Ed O’Neill a.k.a Al Bundy is one of the most famous Brazilian Jiu-Jitsu practitioners. In fact, he’s a black belt and Rorion Gracie’s only black belt.

Jason Statham has been part of this world for over 12 years. Jason started training with his good friend Guy Ritchie. Moreover, he stated that Fedor is one of his favorite fighters of all time.

This beautiful blonde has trained a lot of MMA and BJJ in preparation for her role as Black Widow in the Marvel films and looks very attractive in her Gi.

Mel Gibson was Rorion Garcie’s student when preparing for Lethal Weapon. It’s hard not to be astonished when Gibson is choking out Gary Busey with a triangle choke at the end of this film.

Blink 182 drummer Travis Barker, trains BJJ together with his two children. In fact, he trains at Torrence Academy with Rener and Ryron and regularly tweets about it.

Do you know any other famous faces who are part of the BJJ world? Feel free to let us know below in the comments section.