MMA Grappling: How to Approach BJJ Training with MMA Gloves

One thing I recommend to everyone that trains BJJ is to try and roll using strikes at least a few times a year. I do it myself at my academy, and as I am looking to integrate regular combat Jiu Jitsu sessions, I run across questions that I need to figure out how to answer. So, this article is basically my answer about how to approach BJJ training while wearing MMA gloves.

To be blatantly clear from the beginning, I am only focusing on one aspect here – BJJ training with MMA gloves. In that sense, this article is about training grappling only, no strikes, while wearing gloves for mixed martial arts fighting.

The obvious thing that changes when putting on a pair of gloves is gripping. That said, gripping changes in two main ways. First, gloves affect how you can use your own grips, and second, how your opponent might capitalize on gripping your gloves.

In BJJ training, grips are everything. Without gripping someone directly (by placing a hand on their body) or indirectly (by gripping your arms, or gripping another part of your body, like a leg or your neck, with your arm and keeping a part of the opponent’s body in the loop) there is no real way of grappling with people.

Wearing MMA gloves will affect, first and foremost, how you go about gripping your opponent. Having a thicker palm means you won’t be able to rely on sneaky sliding grips as much as you do during regular BJJ training.

This leads to people being able to defend a lot more of your submission attacks and use the gloves to create space and escape your pins.

From the perspective of defending grips, the gloves suddenly offer a lot more surface for an opponent to grip. Moreover, they do not get as slippery when sweaty, especially at the seams, which makes breaking grips difficult at best.

Another important aspect to consider when grappling with MMA gloves that might provide more context is knowing your goal.

During BJJ training, people aim to transition quickly, control many different positions using the tiniest of details, and get a tap via a submission gold.

In MMA, the goal is to either submit or knock your opponent out. That means quick transition and even quicker submission attacks, with control positions used as hubs to deliver said strikes/submissions.

In that sense, lots of the tinkering and finer aspects of pure grappling are taken away by wearing MMA gloves, but when you consider the goal of MMA, it makes sense, doesn’t it?

This brings me to a “revelation” of mine – If you truly want to excel at MMA grappling, grapple with gloves on chasing BJJ goals.

Let’s look at the three main dimensions of combat sports through the perspective of BJJ training while wearing MMA gloves, and how the gloves affect each and every one of them.

While on the feet, the goals are simple – make sure you win the grip fight first or disengage and create distance until you do.

From a purely BJJ standpoint, engaging in standing battles starts with grips and fairly close proximity of the upper bodies of both grapplers. The desired grip checkpoints for control are collar ties (grabbing the neck), underhooks, wrist grips, or body locks.

When you’re looking to threaten a takedown or submissions directly, leg grabs in the form of double or single leg grabs, and ankle picks enter the frame, as well as the front headlock position.

All of these are difficult to obtain in BJJ training because the opponent is actively trying to prevent your grips.

With gloves on, it becomes a lot more difficult to slide out of a grip fight an edge to a grip checkpoint “by chance” simply because of the size of the gloves and the firm gripping surface they themselves offer.

This, however, is exactly what you should consider and use to your advantage. Once again, we’re sticking to grappling with gloves, so no striking means you can’t open up space for takedowns by jabbing.

Out of the checkpoints we covered, the easiest to look for is an underhook. There is ample space to thread an arm through, and it is quite easy to use your other arm to aid your efforts. Since people first protect their heads, going for an underhook grip seems to be the smart choice.

An underhook will tie up one side of the opponent, and the traction provided by the glove means you’ll be able to hold on to it regardless if you are grabbing their shoulder, armpit, or lat.

You could also opt for double underhooks, Marcelo Garcia-style, and grab a ball in socket grip, which will be impossible to break due to the glove. In fact, if you feel the opponent slipping, switching to a body lock has proven to be the second-best accessible control grip for standing exchanges.

In terms of direct threats, headlocks with MMA gloves are quite difficult. Getting a chin strap grip is hard enough with bare knuckles, so I’d advise against this one. Sneaking a power half Nelson is a great alternative.

Grabbing the legs with MMA gloves is not much different from doing so without them. In fact, the gloves make your grip stickier and more difficult to peel off or sprawl out of.

Grappling with MMA Gloves from the Top

Trying to grapple with MMA gloves from the top means we’re taking away a huge weapon of MMA – ground and pound. Instead, looking to hit BJJ goals of control and submission setups with the gloves on will, once again, be different but can work in your favor.

The first thing to consider is posting. When on top, the bottom person has to create space to escape, and that happens when they off balance you. Posting with an MMA glove gives the bottom person a firm gripping surface.

The solution is to switch to controlling via pressure in every position where it is possible. Since you’re not going to strike anyway, there’s no need to stand upright. So stick to your opponent as much as you can and use your head to post before giving the bottom person access to your gloves.

This will leave you free to isolate and hunt for armlocks. And yeah, when BJJ training with MMA gloves from mount or side control, I advise americanas, Kimuras, straight armlocks, and armbars over chokes, since you can get them without having to open up space in between you and the opponent, i.e., without position your arms.

From the back, Danaher’s straight jacket system principle of trapping one arm with your leg is a must. You will be able to pull off a rear naked or short choke with gloves on, but you’ll have to isolate both their arms. If the opponent is also wearing gloves, the trap becomes much more effective, and eventually, you’ll expose the neck.

Lastly, I’d advise patience when training Darce and Anaconda chokes. While locking them up with gloves is superior to grappling with bae knuckles, setting them up will require tinkering when it comes to threading the choking arm through.

Grappling with MMA Gloves from the Bottom

Fighting off your back is difficult enough without introducing bulky gloves that make gripping a nightmare. That said, if you can figure out what not to do, you’re left with the choices that will actually provide you with an effective result.

Regardless of the type of guard, you want to ensure that you are breaking down your opponent’s posture. Grabbing their own gloves at the level of the knuckles is a great attachment point that will make playing guard a lot easier.

From guards that allow it (like closed guard), an overhook is the absolute best means of control you can get with gloves on. The arm will stay stuck, and you can easily sweep, submit or transition to another guard, having isolated one side of the opponent’s torso.

When looking for submissions, I’d again avoid taking the bulky glove to hunt for the small part of the neck that ensures hokes. Kimura locks, Omoplatas, and ankle locks lead the way here as submissions you can easily get. Heel hooks will work, but the grip leaves ample space for an experienced leg locker to get out. Ankle locks, on the other hand, will be next to inescapable.

When Should you Grapple with MMA Gloves?

I’d recommend using MMA gloves for BJJ training if you want to expand on how you can control people via grip fighting. It will open up different perspectives on attacking and defending and make you a better grappler.

If you are interested in purchasing MMA Gloves, make sure to check our guide for the 6 Best MMA Gloves to help you make an informed decision. 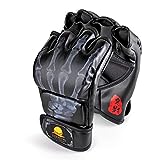 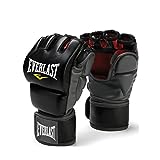 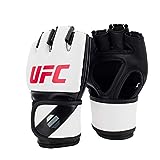 At the end of the day, grappling with MMA gloves is only mandatory for those competing in MMA. However, anyone that takes part in BJJ training should at least try it to see how many different perspectives open up when you’re forced to think outside the box. Oh, and if you’re a grappler only, make sure you roll a few rounds with strikes every year.

Ogi is a black belt that does Jiu Jitsu full time and is very passionate about anything grappling-related.

He is also the head coach of Enso Jiu Jitsu in Macedonia and an aspiring Globetrotter.