“They have a joy for life in Brazil unlike any country I’ve ever seen.” – Morena Baccarin

If something has Brazilian in its name it is easy to assume it must be pretty big in the biggest country in South America, Right? But exactly how big is Jiu-Jitsu in Brazil? Well, as you might have imagined, not as big as Football. Let’s take a look at some interesting aspects of BJJ in Brazil, namely: popularity, academies and competitions.

Popularity of BJJ in Brazil:

Football is the biggest sport in Brazil, that is a given. Brazilian culture and national identity can’t be dissociated from it. There is a saying that perfectly illustrates how seriously Brazilians take this matter: “Futebol, política e religião não se discutem.” – Football, politics and religion shouldn’t be discussed. This is how seriously most people take it. Brazilian people are passionate about their teams, and this passion was carried over to Jiu-Jitsu. While the rest of the world was introduced to BJJ in the early nineties, in its motherland the art has caught attention since the very beginning. The Gracie family was truly a clan of warriors and they were trying to establish Jiu-Jitsu’s dominance over other martial arts in vale-tudo matches since the 1920s, mainly against fighters from Capoeira and Luta-Livre, with with BJJ had a long and grueling feud. During the 1960s vale-tudo matches were televised, until someone’s arm got broken on live TV. Because of that, the show was canceled and a pro-wrestling show took its place, for being “family-friendly”. After that Jiu-Jitsu went “underground” (to the general public at least) until the beginning of the 1990s, when it regained popularity, but for the wrong reason: the pitboys, (Jiu-Jitsu street gangs), who terrorized Rio’s nightlife. From middle and upper classes, they started brawls in bars, nightclubs and busy streets alike. Some rivalries born in Jiu-Jitsu competitions were shamefully carried over to the streets, and these occurrences started getting out of hand, to the point where the news pictured the whole Jiu-Jitsu community as a bunch of mindless hooligans. Nowadays, after many years of bad rep Jiu-Jitsu is once again seen as a respectable sport and martial art, having grown quite considerably in last decade or so. There are many politicians, celebrities and even superior court judges who are BJJ black belts. 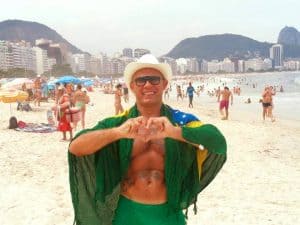 Brazil is home to the sport and, of course, to the biggest Jiu-Jitsu teams in the world. BJJ is widespread in its homeland, and there is at least one Jiu-Jitsu academy in every major city in Brazil, from the hot tropical forest state of Amazonas in the north to the cold ridges of Rio Grande do Sul in the south, to the point where even small towns have more than two gyms. While there are independents, as a general rule most academies are branches of one of the most traditional ones. Please note that the following list is not by any means written in stone, and the perceptions shared here might vary greatly from region to region. It’s impossible to effectively get to definite numbers of students, given the informal way most gyms are ran by their professors, but regarding fame and competition results, the top three academies in Brazil are:

World’s largest academy, present all over the world, was the most prominent team in the 2000s. Founded by Carlos Gracie Jr., it carries the legendary last name and is easily recognizable by their logo and red t-shirts. Its headquarters are in the USA, but GB is all over Brazil. Famous names: Roger Gracie and Bráulio Estima.

Under the leadership of “General” Fabio Gurgel, Alliance was founded in 1993 by Romero “Jacaré” Cavalcanti, and his students Fabio Gurgel, Alexandre Paiva e Fernando Gurgel. The headquarters are also in the USA. Famous names: Mario Reis and Marcelo Garcia

Founded in 2008, this academy has quickly risen to the top spots in the sport, mostly due to the high-talented athletes formed in its ranks, like the Mendes brothers. Once again, its headquarters are in the USA. Famous names: André Galvão and Keenan Cornelius

Competitively, Brazilian athletes both male and female dominate pretty much every major tournament in the world, and that is only natural. It wasn’t until the first UFC in 1993 that the world was awed by Brazilian Jiu-Jitsu, but the sport had been developing in Brazil for a long time before. The first edition of the IBJJF Worlds was held in 1996, and the Brazilian have won almost every division ever since. As for national and regional competitions, there are plenty, and if you were willing to travel a bit, you could compete every weekend. The major competitions held in Brazil are the Campeonato Brasileiro de Jiu-Jitsu (Brazilian nationals) and the Sulamericano (South American tournament), and even if they’re held in Brazil, many fighters from all over the globe gather every year to compete.

Being Jiu-Jitsu’s place of birth, it is no surprise that Brazil is such a fertile ground for BJJ. Despite the serious problems faced by Brazilians (such as violence, corruption, unemployment and poverty), the number of practitioners steadily grows, and this can be measured by the ever-growing number of new academies, tournaments and events. Mainstream media doesn’t do a great job in covering the sport, and even the most famous jiujiteiros can walk around almost anonymously in their own country. The government doesn’t invest in the sport at all, and the consequences of this are simple: Brazilian Jiu-Jitsu is growing faster in the USA and in other countries were sports are taken more seriously. Brazilian grapplers who want to live off the sport have a much better chance of succeeding if they live abroad, for it is very difficult to have an athlete’s life here without any form of financial suport. In spite of all the adversities, Brazil is still the Mecca of Jiu-Jitsu, and everything indicates it will be like this for a long time. What about your country? How big is Jiu-Jitsu there? Please share your thoughts in the comments.