Brazilian Jiu-Jitsu is a martial art of Japanese heritage that was developed in Brazil during the beginning of the twentieth century. The name Jiu-Jitsu comes from the Japanese words jujutsu, meaning gentle or subtle art. Today we’ll be taking a brief look at the history of the art, its origins, and how it became what it is today.

Brazilian Jiu-Jitsu has a beautiful and intricate history. Kodokan jujutsu (the art that would become 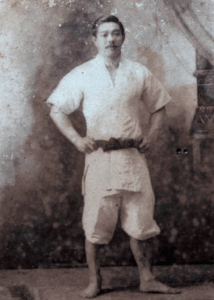 universally known as Judo) was brought to Brazil by Mitsuyo Maeda (a.k.a. Count Combat and Count Koma), who landed in Porto Alegre on November 14, 1914.Maeda was a Kodokan Black belt at the time, and had already travelled to the USA, Cuba, Mexico, El Salvador, Costa Rica, Honduras, Panama, Colombia, Equador, Peru, Chile and Argentina. During his travels he challenged fighters from all different styles to prizefights, and took part in Judo demonstrations.  He travelled alongside fellow black belts, including Soichiro Satake, who opened the first Judo school in Brazil. In 1917, in Belém do Pará a young man named Carlos Gracie watched a demonstration in which Maeda controlled and submitted a larger man. Carlos’ father, Gastão Gracie, was a partner of the American Circus, where Maeda’s demonstrations took place. Being a friend Gastão, Maeda agreed to teach Carlos the art of Kodokan Jujutsu, and after a few years Carlos started teaching his brothers. In 1921 the Gracie family moved to Rio de Janeiro and Carlos travelled around the country teaching and fighting against bigger opponents. 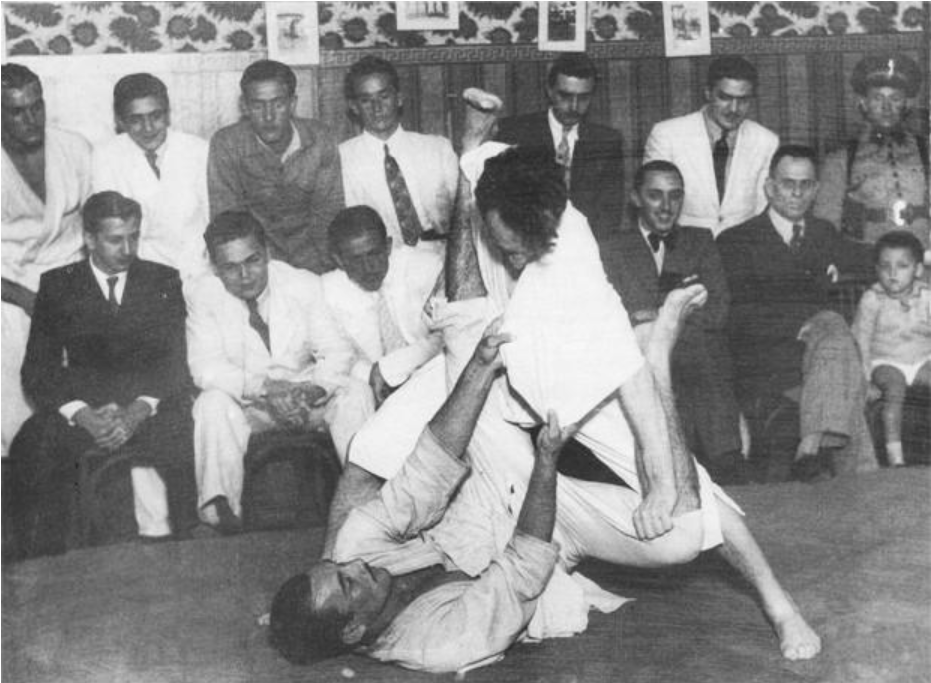 In 1925 he went back to Rio de Janeiro and opened the first Gracie Academy of Jiu-Jitsu alongside his brothers Osvaldo and Gastão Jr., and also became responsible for his underage brothers George and Helio (respectively 14 and 12 at the time). He taught his brothers the art he learned from Maeda, and also his philosophy and diet – the Gracie diet. In order to prove Jiu-Jitsu superiority against other fighting styles Carlos challenged the greatest fighters of the time. He and his brothers gained notoriety for defeating heavier and bigger fighters while using Jiu-Jitsu techniques. Helio was a frail kid, and his doctors suggested he only watched classes, without taking part in them. But one day a student arrived to have a class with Carlos, who wasn’t there at the time, and Helio offered to teach that class. When the class was over Carlos arrived, apologizing for being late, but to his surprise, the student liked Helio’s class so much that he wanted him to be his teacher from then on. Due to his frail condition, Helio didn’t use as much strength as his brothers would, favoring leverage and the principle of action and reaction instead. This is how what we know as BJJ today was born. To prove the style’s effectiveness Helio challenged big opponents to no-holds barred fights, strangling and submitting them in a clear display of technical superiority. To prove his new method’s efficiency, Helio challenged basically all the mosts respected martial arts practicioners in the country at the time to vale-tudo (anything goes in Portuguese). He fought 18 times, including challenges against the heavyweight wrestling world Champion at the time, Wladek Zbysko, and the world’s second best judoka, named 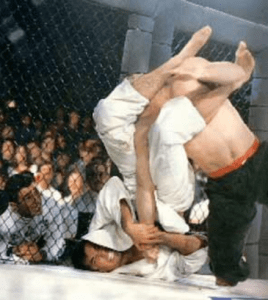 Kato. Helio choked Kato unconscious after 6 minutes, and this fight qualified him to step on the ring facing Masahiko Kimura, who was 35kg heavier than Helio. Kimura won the fight, but was so impressed with Helio’s skills that he asked him to teach Jiu-Jitsu in Japan, admitting that the techniques shown during the fight didn’t exist in Japan. Helio also taught his own sons and nephews the art he envisioned, and they followed the family tradition of challenge fights, making Jiu-Jitsu more and more famous in Brazil, until they decided to move to the USA and make it known worldwide. After a series of the so-called Gracie Challenges, in 1993 Rorion Gracie created the UFC, a televised fighting tournament that had the purpose of showing the whole world the power of Jiu-Jitsu.

BJJ and MMA are intrinsically connected, from the old days of vale-tudo fights in Brazil, to the creation of the UFC, but Jiu-Jitsu as a standalone sport kept developing independently. In 1967 the world’s first Jiu-Jitsu federation was born (Federação de Jiu-Jitsu da Guanabara, in Rio de Janeiro), and a ruleset was given to the sport, even if it was primitive compared to today’s standards (taking the back and mounting you score you 1 point!). In 1994 the IBJJF (International Brazilian Jiu-Jitsu Federation) came to be, and so, the sport was now regulated worldwide. In 1996 the first World Championship was held, the sport has grown exponentially ever since, with people from all over the globe training regularly. Nowadays Jiu-Jitsu is regarded not only as a martial art or combat sport, being considered a way of life. Physical activity, sport, self-defense, and combat discipline are some of the aspects of it, and people of all ages and backgrounds are on the mats every day, keeping the flame alive. A century after Count Koma’s landing in Brazil, the art can be practiced from Alaska to Mongolia, from Abu Dhabi to Japan. It is practiced by children, adults, military, civilians, businesspeople and athletes, in short, all kinds of people, regardless of age, gender, or race.

This was just a superficial take on BJJ history. There is much more to learn and many sides to the story. Great characters were involved in the creation and development of Jiu-Jitsu, and its lore is rich and ever-growing. Maybe we can talk more about some interesting and funny situations regarding BJJ in a coming article. Just remember that from Maeda’s first challenges to the class you are taking tonight, we are all part of this rich and detailed culture, and story is still being written today, by anyone who embarked on this trip. Put on your gi (or rash guard) and make history!