Last updated on 14.04.2020 by Jeremy
Table of Contents show
1 Talk it out
2 See it as an opportunity for a real-life scenario
3 Wait for your moment
4 Fight fire with fire
5 Top Pressure
6 Get a higher belt
7 Summary

“Arte Suave.” It sounds so poetic, doesn’t it? Jiu Jitsu is often thought of as the gentle martial art. For the most part, that is true. Jiu Jitsu generally forsakes striking techniques in favor of joint locks and chokes to “persuade” an opponent to submit.

But, you wouldn’t watch a wrestling match and describe it as a gentle exchange. What’s the difference? Aren’t Jiu Jitsu and wrestling both grappling arts? Perhaps the biggest difference in how the two grappling styles are perceived is the level of aggression.

A Jiu Jitsu gym is usually a relaxed and even friendly environment. Training partners often flow roll and focus on nailing down precise positions and submissions. After all, Jiu Jitsu can be an intimidating sport to start training. Why alienate newcomers with an overly aggressive approach? 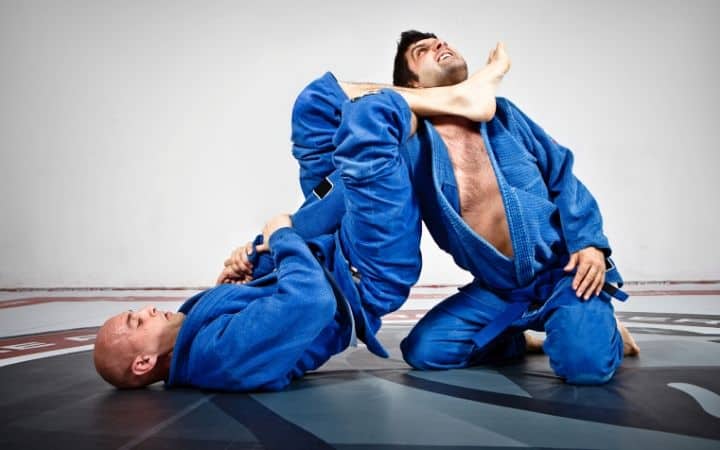 Despite the typically good-natured Jiu Jitsu community, every academy has one or two members that always roll like their life is on the line. They smash through their training partners with little regard for safety.

Sometimes this behavior can be chalked up to enthusiasm combined with a lack of self-awareness. Other times, the aggressor may have no respect for the idea of rolling light or their partner’s well-being.

Whatever the case may be, you will have to be equipped to deal with an aggressive training partner. You might learn a few things about your own game in the process. Here are a few tips from our readers on handling aggressive people on the mat.

Martial arts can teach us to calm a tense situation and hopefully avoid a fight when possible. Communication with your training partners is vital. Whether you’re injured or you’re new to Jiu Jitsu, discuss your ideal level of training intensity with your partner before you roll.

Before you slap/bump your way into a dangerous roll with the resident mat bully, start with “Hey, I’m new, can you teach me a few things?” Or, “Let’s roll light.” If they refuse to respect your stated preference for intensity, scream for your nearest mat enforcer.

See it as an opportunity for a real-life scenario

If your academy’s mat bully refuses to listen to reason, you may have no choice but to embrace the tough roll. Use the opportunity to simulate what a real-life attack might be like.

Although the safeguards of your academy are still in place, you can at least practice your technique against a relentless aggressor. Take time to focus on how well your technique holds up against greater strength, speed, and intensity. This is also a great time to test your mental fortitude when under attack. 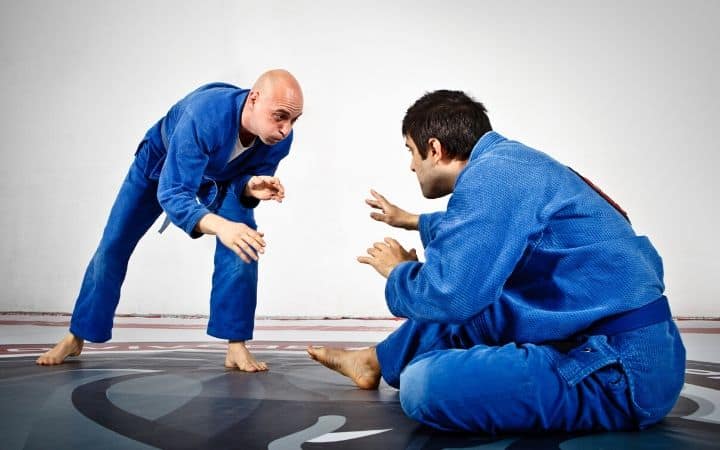 Wait for your moment

Many of our readers agree that one of the best ways to deal with an aggressive training partner is to simply wait. If you can “weather the storm” of your partner’s initial explosion, you may find that they expended most of their energy.

Use the moments in between their attacks to strike. If you’re able to follow the trajectory of their movements, you may be able to get them to put themselves in a bad position. Oftentimes, an overly-enthusiastic attempt at passing guard will open up your partner to a triangle attack.

Let’s assume you are preparing for a tournament, or you are really trying to push your cardio. The intensity of an aggressive training partner could be just what you need. If you’re not feeling zen enough to wait it out, or talking hasn’t worked, try applying some aggression yourself.

This is a strategy you may want to avoid until you are more experienced, perhaps when you’re a seasoned blue belt. Otherwise, you may fall into the trap of becoming the same mindless aggressor you were the victim of. Directed aggression can be useful, as long as you maintain your wits and technique. 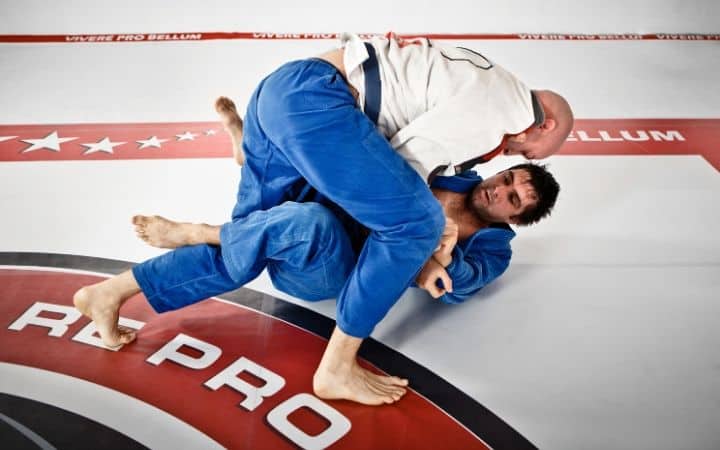 Generally, your aggressor will be playing a forward pressing, top game. Assuming they lack the techniques for a well-rounded game, they may ditch the more passive bottom game in favor of throwing your legs to the side and flopping on top of you.

A well-timed sweep or takedown on your part can quickly change the pace of the round. Once they are on their back, they may frantically flounder, but be sure to maintain a good base. This is another spot where an overly aggressive partner will eventually tire themselves out.

If your pressure is lacking and you’re having trouble keeping them still, stay on the move. As long as you can keep them from establishing a good base or grips, they should remain on the bottom.

A sure way to “politely” assert your own will on an aggressive partner is with knee on belly. A well-applied knee on belly can sap the will of the most aggressive opponent. For added power, angle your knee onto their sternum while pulling up on their head or lapels to feed them into your knee’s pressure. This can even submit less experienced opponents. 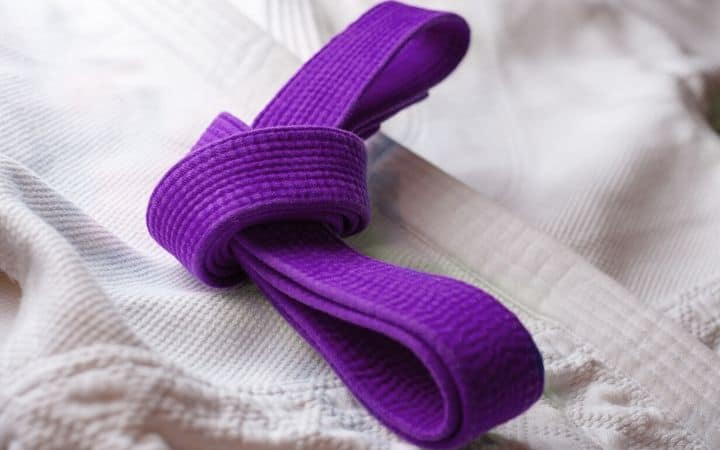 Get a higher belt

Think of it less as tattle-taling and more as maintaining the academy hierarchy. Maybe you’re both the same belt level and they don’t listen to you when you try to give them advice. They will be more likely to respect the word of a higher belt.

Maybe you’ve slowed your game down and waited for your moment…and they smashed you. Perhaps you met their aggression with your more technical intensity…and they still smashed you.

It might be time to find that higher belt who deals with these people best. Anyone can be a mat enforcer, so seek them out at your academy and make friends.

A mat enforcer might be the 200 pound Marine/wrestler with a heart of gold. Or, they could be the small, brown belt girl who constantly has to prove to white belt guys that she is going easy on them, not the other way around.

Whoever your mat enforcers are, make sure you tug on their belts and point them out to the mat bully. You may find that your next roll with them is a little more relaxed. 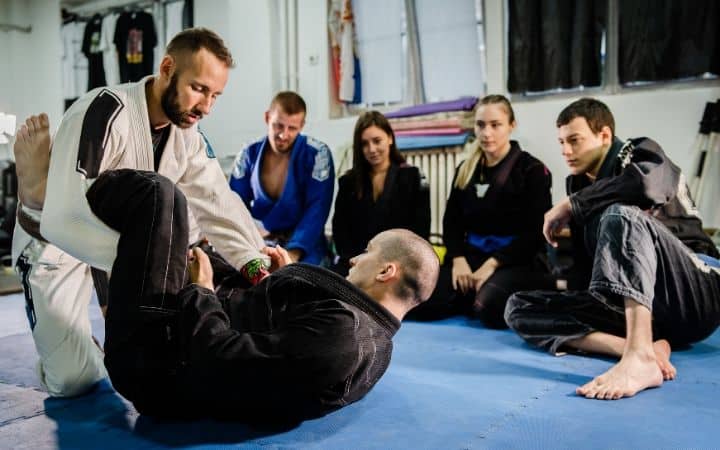 Aggression is a part of nearly every sport. Although Jiu Jitsu is gentler than some of its martial arts counterparts, it is no exception. However, learning Jiu Jitsu can be much harder when you constantly have to fight for your life against overly aggressive training partners.

Whether they are less experienced, or just lack common courtesy, it is important to know how to deal with aggressive partners in Jiu Jitsu.