How to ”Roll” with Bigger Opponents

Table of Contents show
1 Protect your neck
2 Use the back take
3 Be technical
4 Use trips
5 Butterfly guard
6 Master the rear naked choke
7 Stay ready, not heavy
8 Final thoughts

Rolling against bigger opponents that are at the same skill level as you are is challenging. They usually have the upper hand when it comes to weight advantage, power, and strength. Larger opponents recognize these advantages, so they utilize them. There are a few principles and strategies to keep in mind when training, sparring or competing against them. Let’s discuss them in more detail.

Your neck is very vulnerable, and you should always protect it when rolling with bigger opponents. It is also weaker compared to other body parts. One thing is for sure bigger fighters like to attack the neck and use their strength to finish the submission. There are a couple of ways to do that.   One way is to apply a choke which cuts the blood circulation to the brain. A second option is a neck crank. The crank is so uncomfortable that you tap out. Occasionally their forearm ends up on your chin, and that is not a pleasant feeling. Failing to ”tap out” on time can lead to serious neck injuries over time. As I mentioned above, your neck cannot handle too much stress before things such as discs in your cervical spine begin to bulge.

Use the back take

Learn how to be a human backpack when you roll against bigger opponents. It is one of the most effective techniques. To take ‘’Shrek’s’’ back you might have to work a bit since it is not an easy task. So, how can you accomplish it? Well, let’s say you bait your opponent so you can end up in half guard (you are on the bottom). Whenever you are underneath you never want to be flat, both shoulders touching the mat, with ‘’Frankenstein’’ on top. Instead, try to post on the side of your shoulder preferably your more dominant shoulder. The key is not letting your opponent close the distance. You can prevent him from doing that by using your hands and feet similar to the video below.

If you think you are going to rely only on strength with someone outweighing you, think again. Using too much strength in Jiu-jitsu usually serves as a disguise for bad habits or poor technique. It will carry you to a certain point in Jiu-jitsu. Past that point, you have to become a well rounded technical player to reach more advanced levels. Taking on an opponent as skillful as you who is more massive than you requires technique. Usually, technical players are also great at strategizing. A ‘’big challenge’’ asks for a decent strategy. For example, if you end up in a bad position like mount or side control, don’t panic. Panicking will cause you to lose valuable energy, and caring your opponent’s weight does not make things easier. Keep your cool and use timing and strategy to get out of trouble. Proper technique will make you more efficient with your movement and prevent you from emptying the gas tank.

It is not a great idea to shoot a single or double leg takedown against someone that is much heavier than you are. You will be risking injury and potentially end up in a disadvantageous situation. Instead, use trips to get your opponent down. A rule here is to create motion. Tripping a more prominent opponent with their feet firmly planted will be almost impossible. Therefore you have to force them to move. The best way to do that is by using your footwork and quickness. Use your footwork also to take advantage of counter attacks.  With that said keep in mind that there is a weight difference, so be prepared to defend against their takedown attempts.

Your legs are powerful. Therefore utilizing the butterfly guard against a larger fighter is going to be extremely beneficial. If you are familiar with the butterfly guard position, you know that your opponent may be at a disadvantage due to their kneeling position. Kneeling limits the use of their legs. On the other hand, you can use your arms and legs while actively playing butterfly guard. Having two more tentacles available enables you to block the other person’s arms and attempt a sweep attack using your legs. Before setting up attacks, you need to have control of your opponent which is why grip and hand fighting are also integral parts here. So, explore the butterfly guard and become comfortable with it. 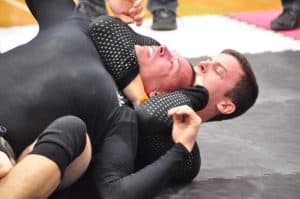 I mentioned before that the neck is relatively weak compared to other body parts. That also holds true for more prominent people, unless their neck is the size of their torso, there are some ”freaks” out there. Regardless of how big someone’s neck is if there is insufficient blood to the brain they will be forced to submit or otherwise pass out. Rear naked choke is one of the best weapons to tame giants. In Brazilian Jiu-Jitsu it is referred to as the Mata leão ‘’lion killer’’. It is a basic submission which you probably may already know. That should not stop you from refining the small details related to grip fighting and control of the arms which will ensure a higher completion rate of this technique.

Yes, it is better to be ‘’heavy’’ when you have top position on your opponent. However, versus a more prominent fighter, it is more beneficial to stay ready. Sometimes no matter how heavy you stay on top a much bigger practitioner will reverse your position. You should not be bothered by this. While on top rather than focusing on putting pressure with your weight and thinking of how not to give up your position, start planning your next move. There are multiple ways of applying pressure that is not limited to weight. Quickness, agility, effective transitions, and keeping your opponent on their heels are all valid ways of using pressure.

Jiu-jitsu is a game of strengths meaning different qualities such as quickness, strength, agility, technique, and being great at strategy. Different styles and body types make Jiu-jitsu dynamic, and although you do not have to change your style or body, you should be able to adapt using different qualities or skills suitable for the given challenge in front of you. For example, you should not be trying to overpower a larger opponent. On the contrary, BJJ is an art that permits people to take advantage of others strengths. Someone who is weaker, but quicker, smarter and agiler can defeat a bigger and stronger person. Think Muhammed Ali versus George Foreman. 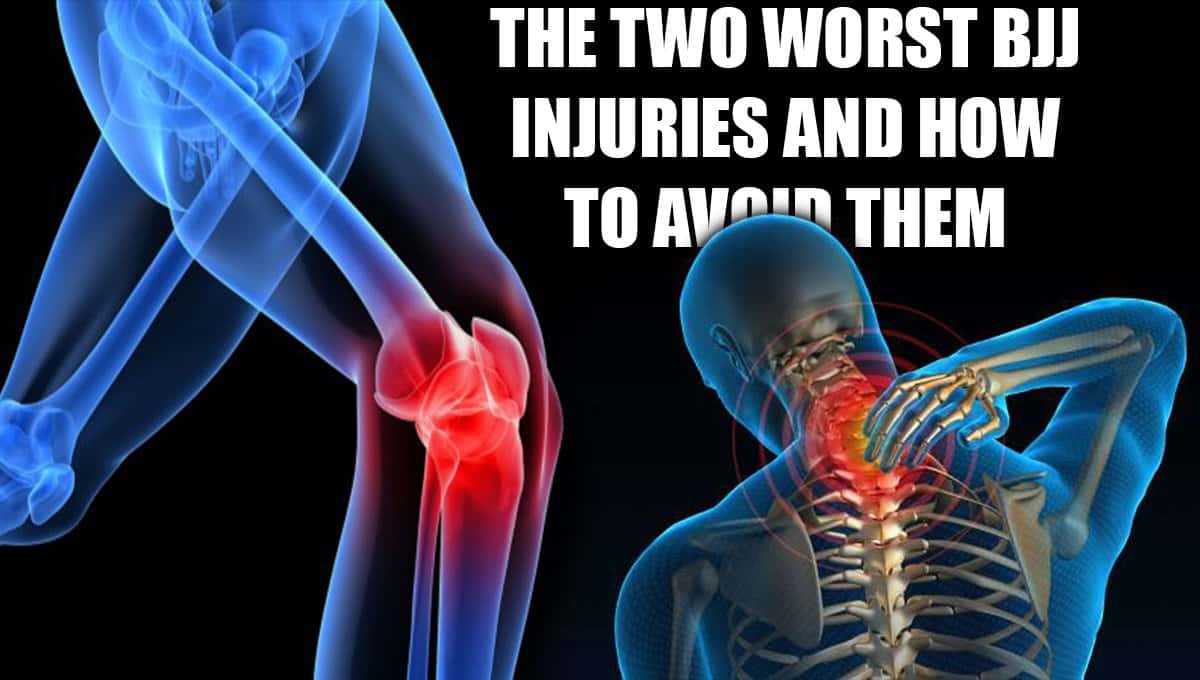 The 2 Worst BJJ Injuries and How to Avoid Them 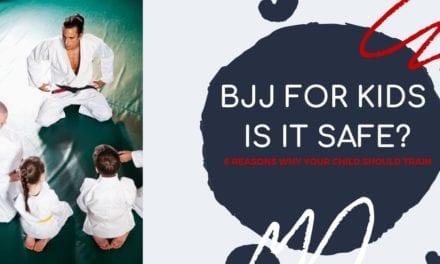 BJJ FOR KIDS – IS IT SAFE?- 6 REASONS WHY YOUR CHILD SHOULD TRAIN 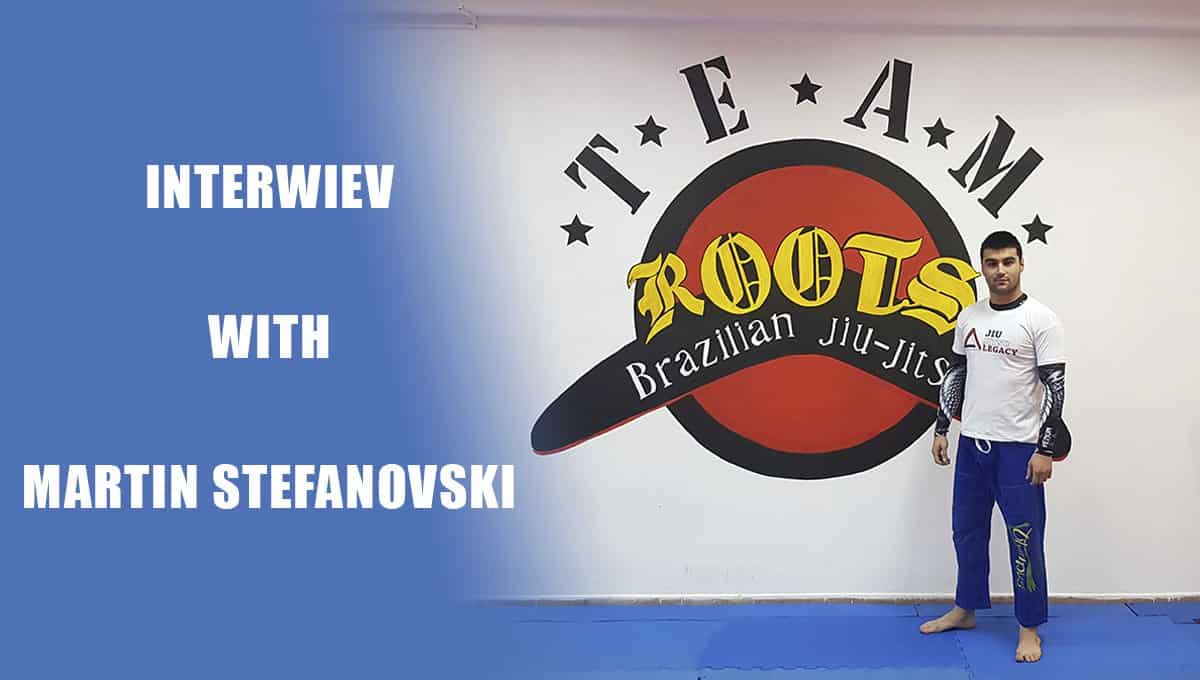 Interwiev With Martin Stefanovski – Never Quit, no Matter how Hard it is 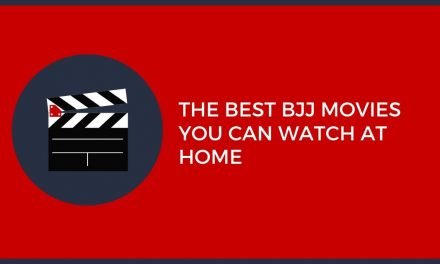