Last updated on 28.02.2019 by Jiu Jitsu Legacy
Table of Contents show
1 Can you tell us more about you? When did your jiu jitsu journey begin? How did you find out about bjj?
2 Tell us more about your Academy and your affiliations
3 Can people come and visit your training if they are training under another academy?
4 Tell us more about the BJJ scene in Australia?
5 Why did you decide to open the Roots BJJ academy in Skopje, Macedonia? Tell us how do you see BJJ growing in Macedonia over the next few years?
6 Can you share some of your routines? Tell us more about your training and eating habits?
7 What is your advice for people who train bjj? Everyone speaks about white belts because they are the most confused ones, can you give some advice for the other colors too?
8 What you do in your free time, what else you love to do? What means bjj lifestyle for you?
9 Do you have any advice for our readers? Any tip that can help people on the mat or real life.

My name is Robert Naumoski, I’m a 44 year old Martial Arts instructors at Roots Jiu Jitsu. I began my journey in Jiu Jitsu at the age of 22 and received my black belt in 2010. Like everybody else in Martial Arts, I was in awe of Royce Gracie and how he defeated his opponents with ease in the first UFC. I quickly realized that I just had to learn this martial art. The local JiuJitsu gym was run by an instructor named Wayne, he was one of the very few blue belts in Australia at the time, he became my first instructor. In 1999 Wayne came across a martial arts magazine, where he saw that Australia had its first Brazilian Black Belt, Paulo Guimaraes. We immediately began out training with Paulo. My lineage is: Jigoro Kano => Mitsuyo Maeda => Carlos Gracie => Helio Gracie => Rickson Gracie => Jorge Pereira => Paulo Guimaraes => Robert Naumoski. As of 2018, I have had the honor of grading six students to black belt.

Paulo and Jorge started Roots Jiu Jitsu in 2001, I became one of the first affiliated instructors in 2003 and we now have academies in Australia, Europe, Asia and America. The name Roots represents the original Gracie style of Jiu Jitsu which was taught to Jorge Pereira by Rickson Gracie. In this system we have a strong emphasis on self defense as well as a competitive style, both for grappling and MMA. I myself am responsible for 10 Roots academies which include the ones in Macedonia. I am head instructor of St George Roots in Sydney (www.udasydney.com). We offer a full time training schedule – early morning classes, lunchtime classes and evening classes. I actively teach 22 classes per week, which involve kids, adults and women’s self defense classes alongside working with MMA fighters.

We are proud to say that we have had visitors from all around the world, regardless of their affiliation. We have hosted and assisted in the preparation of UFC fighters during Sydney events. We have also hosted seminars for the likes of Mario Sperry, Royce Gracie, Firas Zahabi, Steve Maxwell, and many more. Our students regularly travel and visit other academies, this has allowed us to build a strong network around the world. 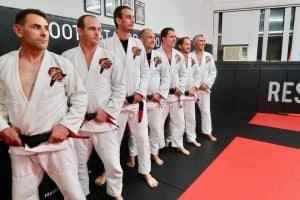 The BJJ scene in Australia has grown exponentially in the last decade; we now have active competitors in international tournaments. This has also transcended into MMA where we now have our very own middleweight UFC world champion – Robert Whittaker

I was travelling throughout Macedonia in 2010 for my honeymoon. I met Ivica Alekovski and realized I was the first ever black belt from a Macedonian heritage. Ivica and I organized a seminar, and to my surprise we had a very large response. With Ivica’s assistance, we soon started the first Roots gym in Skopje. Macedonia, along with the Balkan region, has a rich history in combat sports, where most of the JiuJitsu practitioners have a background in Karate, Freestyle and Greco Roman Wrestling, as well as Judo. Combat sports have been a part of the Eastern block mentality and integrated into our culture. I see BJJ growing rapidly, where in the not too distant future, we will have more international champions in Jiu Jitsu and Mixed Martial Arts. 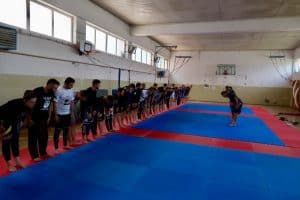 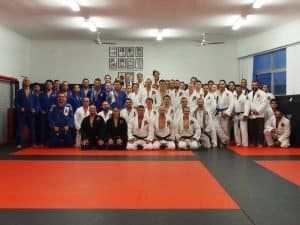 I teach 22 classes per week and roll in about ninety percent of them. This keeps me in very good physical condition. I also lift weights twice per week, train Kickboxing and practice knife fighting on a weekly basis. I don’t over do any exercise, the main focus for me is on preserving my body. I also actively work on recovery, once a month I get a deep tissue massage and more if necessary to recover from minor injuries. My eating habits are probably the most important aspect of maintaining my lifestyle, food can be your greatest poison or your best medicine. I avoid foods that I classify as poison, these include; processed sugar, processed meat or anything else that is dense in calories and low in nutritional value. My favorite meal is steak with a large amount of vegetables, I especially like Kangaroo steak – it is an extremely lean protein source. I avoid sugar but will have desert occasionally when out with family, I treat sugar the same way I treat alcohol, I only have it on rare and special occasions.

The most important piece of advice I have is to take it slow, as the old saying goes,”Rome wasn’t built in a day”. When a beginner comes into my club we take them through our whole session with about forty percent of the intensity. When it comes time for live rolling we make sure they are with the most experienced practitioners that will allow them dominant positions and slowly adjust them correctly as the sparing continues. This way they see the effectiveness of the moves without getting hurt. With intermediate to advance students I advise them to adjust their training accordingly, this in itself requires you to have a level of intuitive experience. Lets say you have a slight shoulder / elbow or wrist sprain and it is swollen – tuck your injured hand into your belt and let your sparring partner do the same. This can also be done when your rolling partners that you are much better then, this way its more challenging for you and it gives your partner a better chance to attack. Remember there will come a time when life gets challenging and obstacles can get in your way of training, this will be a true measure of your character. When this happens remember why you started and the benefits that Jiu Jitsu instilled, because at the end of the day, the black belts in the room were not the most talented, they where the strongest willed and developed strength of character that allowed them to perceive and concur through adversity. At the end of the day, your will power will determine how far you go in your Jiu Jitsu career 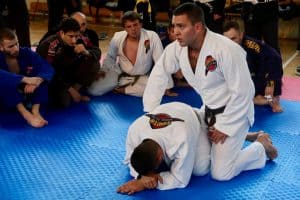 Being a full time instructor means that most of my free time is spent with my wife and kids. I really enjoy taking my wife out and having a night on the town where we just relax and let our hair down. I also enjoy taking my kids out in nature. Being in Australia we have a strong beach culture, we live 100 metres from the beach and we spend most of our summer months on the beach. I am also an avid reader, I average about two books a month. My professional background is in mathematics, my students laugh when I use math references to adjust techniques. I run a tuition centre and teach mathematics, I really enjoy the subject because there is a certain purity to it, just like in Jiu Jitsu,you can either make it work for you or struggle with it the rest of your life. I don’t particularly like the term BJJ lifestyle, I believe a healthy lifestyle is for everyone, a proper diet combined with sensible exercise. So your first step in BJJ is to develop a healthy lifestyle, but this is just the beginning. The rest is when the hard part really begins, taking on the real challenge of forever learning and progressing your technique. This is were I believe Jiu Jitsu plays a pivotal role in your character development, and is the reason why most people quit after getting the blue belt.

Take is slow and steady, the most important thing is to attend classes regularly. Make it a part of your weekly schedule and do not over do it, after each training session make sure you are capable to function properly the next day. You should never wake up so sore that you can’t function the next day, this will stop you progressing and is one of the biggest mistakes that a see new students make on a regular basis. Where I believe that training can transfer over to real life if that it allows you to overcome and take on problems and adversity. Life is not easy and everyone has problems, some worse than others, but it is how you persevere through them that mentally allows you to take them on that is the measure of life.