The single leg takedown is THE highest percentage takedown out there. We’ll list a couple of counters and setups, but really this article will be a takedown study; a look into the mechanics of why something works.

For those of you who might not have come across the single leg yet, this is a way of putting your opponent onto the ground by attacking one of their legs. Now deeper into this topic, the single leg is much more than just grabbing a leg. Same goes for the double leg takedown.

The reason why the single leg works so well is because the attacker stands on two feet while the attackee is on one. It’s just a matter of simple mathematics. Two legs are always stronger than one. However, there are ways to defend. This defense will depend on how well you understand the single leg yourself. Counters will not work for you if you don’t defend it first.

People usually choose what to attack depending on what leg is exposed. That’s one way to differentiate the single from the double. Another is that you just grab one leg instead of two. But, the real difference is the way your body is positioned and the way you adjust when opponent reacts. Both attacks are most effective when you’re moving your opponent to the side where his knees won’t bend. The circle inside for the single. Circle outside for the double.

Now this is really hard to put into words, and even if it is really well phrased it’s just going to be a bunch of gibberish owing to the fact that the best way of figuring out a physical movement is by doing it yourself. Most athletes are visual learners by nature. Still, for your benefit: change levels i.e. crouch. Step for penetration. Use both feet to propel yourself upward while using the ball of your front foot to fold down onto your knee. Trailing leg follows and bases out onto heel. Place heel so it gives you drive to move opponent with head. We’ve attached a video so this makes sense.

You’re thinking: this is a leg grab. I’m going to use my hands. After you’ve grabbed the leg, you’re not really. You attack this with your hips and head. Hands are just a way of attaching yourself to your opponent.  The setup, however, is very much a matter of hand-fighting, and once you’ve made contact whoever understands the position better will win the battle for getting on top.

Set your single leg up with the arm drag. Grab a tricep. Drop with the cross knee the way you would for a high-crotch(Head Outside Single). Spin from one knee to the other. Expect opponent to circle away from your attack. Have a Kouchi or seoi-nage up your sleeve.

Set the single leg up from the collar tie. Use your handles, head or arm, to pull a leg close to you. Snatch with a knee drop if the opponent’s posture is low.

The High Crotch Vs. the Head-on-the-Inside

At a BJJ tournament, expect the head on the inside single. Fearing the guillotine, I doubt anyone will have the confidence to shoot for a head-outside single.

You’re a BJJ practitioner, ‘cross-face, isn’t that a side control thing?’ Yeah, well, it’s what we call anything that controls the head. During the single leg mechanic section of this article, we mentioned that the way of attacking the single and double depends on the head and hips. Kill the head, and you’ll kill the hips. Use forearms to cross face. Combine the cross face with a sprawl. Sprawl to the inside, turning the hip that’s being attacked towards your opponent.

If the head is wedged in too tightly, use the whizzer control. Dig arm underneath opponent’s front arm. Turn hip into him for sprawl. If he’s persistent drop parallel and base with a free arm into dogfight position.

Time for late defense measures happens if your leg leaves the ground. Chances of getting taken down go up dramatically. The only time when it might be defensively better for your leg to leave the ground is the high-crotch. Sprawling might just put you in the air.

Hook leg on opponent’s outside hip and use whizzer or cross-face to stop him from finishing the takedown from the outside. Chances are you’ll hook the inside thigh first. This’ll interfere with opponent’s base. Watch out for the ouchi, major inside trip, finish. Hook leg outside if he circles for the ouchi finish.

A late defense counter, the sumi-gaeshi works when your leg leaves the ground. Hook the inside thigh. Grab a belt or a lat muscle. Grip a cross grip. Roll over posture gripping shoulder. Turn shoulders using lat or belt grip. Use inside thigh, reverse de la riva hook, to elevate. He flies over. Roll on top. 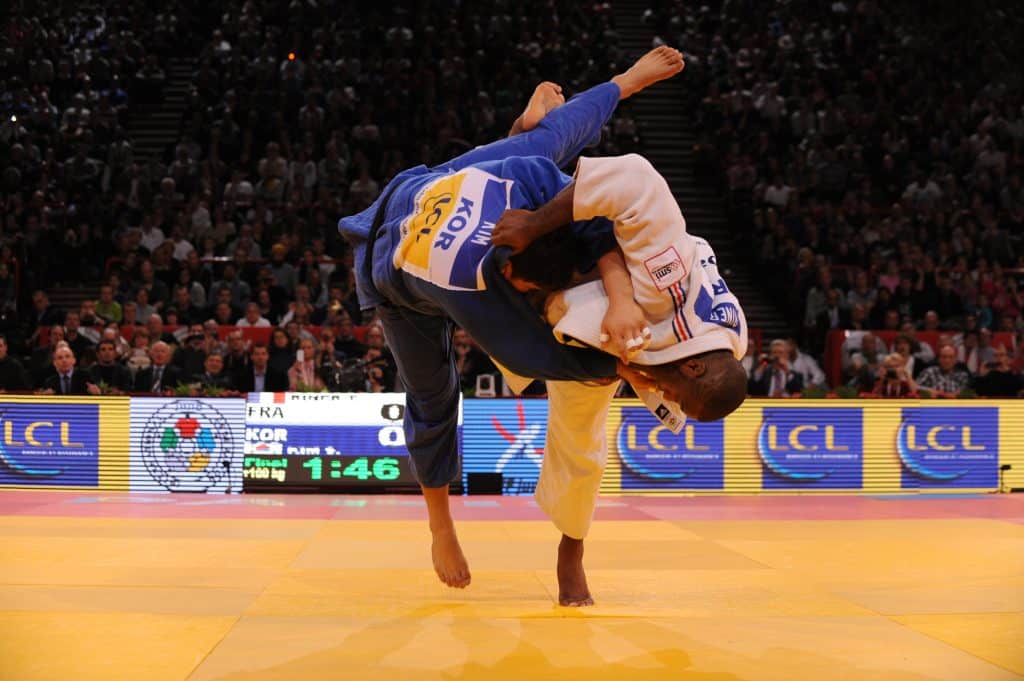 An opponent does everything with sound technique, the head is on the inside, the heel is on the outside. Grab lat. Grab cross-wrist.  Turn shoulders outside and back. Trip the knee. Can also go for a side drop or use underhook to pancake him.

In cases when the head is on the outside, underhook opponent’s leg. Throw him to the side. Optionally go for a switch. Grab cross-leg. Go for a baseball slide. Reverse the position.

Most of what’s in this article is listed as a reference only. It’s not a detailed instructional. Do use at your convenience to look anything you deem useful up.