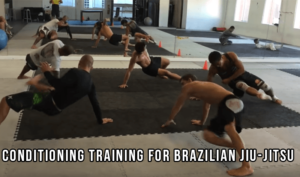 Conditioning, or cardio, is an essential physical component to be a successful BJJ athlete or any combat sport in general. A good analogy is that of a toolbox; think of all the tools inside the toolbox as your techniques. As the match progresses, the lid of the toolbox begins to close and you can access fewer and fewer of your tools. The better cardio you have, the longer your toolbox can stay open. As renowned football coach Vince Lombardi once famously said, “Fatigue makes cowards of us all”.

Energy Systems 101
Just like strength, ‘cardio’ is not a catch-all term. To understand how to properly train your cardio, you must first understand our bodies’ energy systems. There are 3 different energy systems, each with different characteristics.

Anaerobic Alactic
⦁ Anaerobic (does not use oxygen).
⦁ Fueled by adenosine triphosphate, or ATP, which is naturally found in our muscles.
⦁ Highest power.
⦁ Shortest duration with a maximum duration of only about 12 seconds.
⦁ Examples of purely alactic activities: lifting heavy weights for a few reps, short sprints.

Here is a visual example; note the overlap between the energy systems. This means that when you are sprinting, for example, all 3 energy systems are running from the very beginning except that the majority of the energy will be coming from the alactic system for the first 12s, and then predominantly the lactic system up to about a 60s and then primarily the aerobic system from then on.

The Energy Demands of BJJ

If you’ve spent any amount of time researching conditioning for BJJ or MMA on the web, you will likely find numerous articles claiming that high intensity interval training (“HIIT”) is the way to go. In said articles you will find numerous claims claiming that excessive steady state cardio will cause your muscle to waste away, usually followed by a comparison picture of muscular sprinter next to a skinny marathon runner with a caption asking the reader “Which would you rather look like?” Also, many fitness trainers like HIIT for its fat loss benefits, which are undeniable, however that is totally different from conditioning for BJJ.

Since it is clear that the predominant energy system is based on duration, let’s take a look at the time limits within sport BJJ. The absolute shortest time limit in a sport BJJ or submission grappling match is 5 minutes (white belts, seniors matches) while the longer matches can go up to 10 minutes (IBJJF black belts, EBI, ADCC matches), 15 minutes (Polaris), 20 minutes (Metamoris, ADCC finals, not including overtimes) or even more! (submission-only matches, ADCC finals with overtimes).

And with regards to wrestling matches (freestyle, scholastic, college) each period is only about 2 to 3 minutes long, far shorter than a BJJ match, meaning that it would also be more fast paced and utilize the anaerobic system more. Hence, doing more HIIT training for wrestlers makes sense.

Training the Aerobic System for BJJ

Now that we know that BJJ primarily utilizes the aerobic system, let’s take a look at how we can ideally train the aerobic system for BJJ. First, you should know that each energy system has power and capacity. Power refers to the maximum energy that can be exerted by that system while capacity refers to the duration of that system. In terms of BJJ or submission grappling, the idea is to generate maximum power from our aerobic system over the duration of the match (capacity).

First, let’s understand what is the anerobic threshold also known as the lactate threshold. This threshold refers to the point at which your body switches primarily from the aerobic system to anaerobic system; think about a person running at a faster and faster pace; when he hits the threshold he would only be able to sustain that pace for a maximum of about 90s. The threshold is primarily measured by heart rate, or power (wattage). The goal in training our aerobic power is to either raise that threshold, meaning that we only become anaerobic at a higher heart rate or to increase the maximum amount of power at said threshold.

As a good example, let’s use as an example the oft-maligned marathon runner; a world class marathon runner can sustain a pace of over 12 miles or 19km per hour for over two hours, showing an extremely high degree of aerobic power. At that pace, most people would be using their anaerobic energy system and only be able to sustain it for 2 minutes instead of 2 hours! Imagine that if in a BJJ match, your fast paced scramble only used your aerobic system; that means that you could maintain that scramble pace throughout the whole match! How’s that for an advantage?

Here are some guidelines for developing your aerobic system.

⦁ Forms the foundation of your aerobic training.
⦁ Increases stroke volume (amount of blood per heartbeat) and decreases resting heart rate.
⦁ 20 – 60 minutes of activity (can be anything from BJJ practice, running, rowing, circuits etc.)
⦁ Heart rate should be in the 120 – 150bpm range.
⦁ Can be done anytime throughout the year as needed (if your resting heart rate is high or over 60bpm, you need more cardiac output training).

⦁ Increases the lactate threshold or power at said threshold.
⦁ 10 – 20 minutes at anaerobic threshold (+/- 5bpm)
⦁ The duration of each set is up to you but you can set it according to your match time limit.
⦁ 2:1 work-rest ratio.
⦁ Can be performed 1 to 3 times per week.

It is best if you have a heart rate monitor for this training, especially to find your initial anaerobic threshold (go hard until you reach a point that you feel is unsustainable, also note that threshold differs depending on activity type). While you can use various modalities to train the aerobic system, our top recommendation is the C2 rower which works both upper and lower body and allows you to track your workouts and performance much more accurately. Unfortunately, wearing a heart rate monitor while rolling is not the most practical.

What about the Anaerobic System?

As mentioned, the anaerobic system is also important however it should not be the base of your BJJ conditioning. If you wish to utilize HIIT training to develop your lactic system it is best done about 4 – 6 weeks before your next competition. The reason? Most adaptations to the lactic system plateau at about 4 – 6 weeks; doing more HIIT training after that would be of little use, that is why doing HIIT year round is extremely inefficient for conditioning purposes.

As for the alactic system, this will be covered by your strength and power training i.e. lifting heavy weights, short duration sprints, and jumps.

Conclusion
The importance of the aerobic system has been severely understated in recent times while the benefits of HIIT have been overstated. We hope you now understand the importance of optimal aerobic system development for BJJ; having a high level of aerobic power is an absolute advantage on the mat, and will also enable you to access your anaerobic systems more frequently. It can also be trained throughout the year while the lactic system should be used as a ‘top up’ before a tournament.