The world of jiu-jitsu unites on the Abu Dhabi mats

Brazil, the famous jiu-jitsu heartland, was the most represented nation with 180 athletes, while Russia had 61 and the UAE had 56 athletes in action. Kazakhstan, Colombia, France and the UK all offered more than 20 masters each. Twenty-two countries from five continents contributed between five and 15 athletes each, including Azerbaijan, Saudi Arabia, the USA, Spain, Angola and South Korea, the Philippines, Poland, Italy, Bahrain and Mongolia.

“I’ve completed my goal by topping the ranking after going the whole season in the Masters to avoid my brother in the World Pros, we don’t contest each other. I love to compete in Abu Dhabi and it’s a great feeling being in this arena – my mission is complete.”

After losing the 69kg final to Marques, the UAE’s Talib Saleh, who announced he was retiring before the final, said:

“It’s not the best way to go out but reaching the finals was still an achievement. This is the fourth time I have won silver. I want to thank all the UAE Jiu-Jitsu Federation, my coaches and teammates.”

Following her triumph in the 70kg female category, Polyana Lago, a UAE resident for the past eight years, said:

“This division is full of tough girls, so I wasn’t aiming for gold. I wanted to play the game I wanted, feel comfortable and see. Everything I planned on doing happened and I’m really happy – this is my dream, a first gold medal in a world competition.”

Away from the Masters 1 divisions, one of the most memorable performances of the entire ADWPJJC week belonged to UK para-athlete Raphael Dos Santos of the A.F.N.T team. The Brazilian black belt, an amputee, won the ‘Masters 3’ 69kg division against able-bodied opponent, Mario Silva, from Brazil.

“Jiu-jitsu has helped me overcome my injury and achieve my dreams in Abu Dhabi,” said an emotional Santos. “I would like to thank the championship organisers for giving opportunities to para-athletes because jiu-jitsu literally saved my life.” 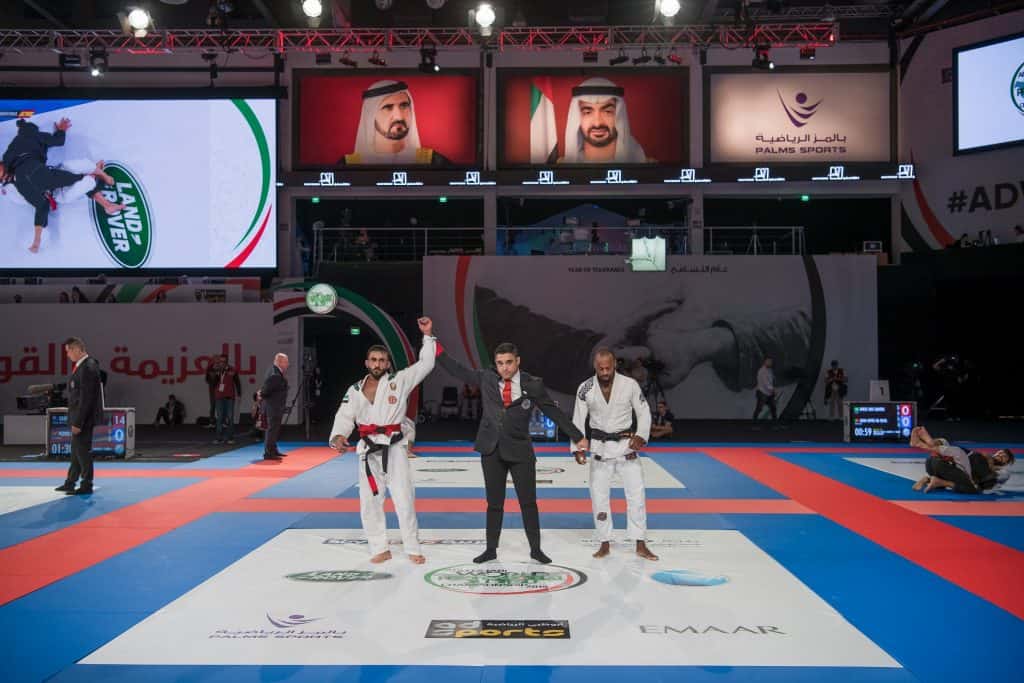 “We are extremely honoured by the presence of His Highness Sheikh Abdulla bin Mohammed bin Khaled Al Nayhan, and His Excellency Aref Hamad Al Awani, General Secretary of Abu Dhabi Sports Council, and we thank all of the high-ranking VIPs who continue to support the Federation’s work in spreading the messages and values of jiu-jitsu across the UAE and beyond,” said His Excellency Abdulmunam Al Hashemi,Chairman of UAE Jiu-Jitsu Federation, President of Jiu-Jitsu Asian Union & Senior Vice President of Jiu-Jitsu International Federation.

His Excellency Aref Hamad Al Awani, Secretary General, Abu Dhabi Sports Council, said: “After 11 years of non-stop progress, the Abu Dhabi World Professional Jiu-Jitsu Championship is now rightly-regarded as the best and largest jiu-jitsu competition in the world. The second decade of this championship will provide us with even more quality talent as we extend the pool of international players. The championship also represents a great platform for UAE players to compete in global competitions. We are witnessing a great level of attendance and enthusiasm from the spectators – we are very proud.”

On the first day, adult male and female athletes holding black, brown, purple and blue belts, under the age of 30, will contest matches in numerous weight categories ranging from 49kg to 110kg.

On Thursday’s second day, main bracket matches for adult male and female black and brown belts in weight categories ranging from 49kg to 110kg will determine the final qualifiers for Friday’s Finals.

“We are ready for a spectacular finale to the 11th edition of the Abu Dhabi World Professional Jiu-Jitsu Championship. This is where the dreams of jiu-jitsu athletes from every corner of the world will be broken or realised,” said Mohammed Hussein Al Marzooqi, Director of Marketing and Finance at the UAEJJF and Director of the ADWPJJC.