Coach Ben Jones, a prominent figure in the CSW gym, AKA “The Badger,” is one of the best submission wrestling coaches around. He was the first professional fighter out of Erik Paulson’s gym after a stint as a pro football player.

Ben is also an expert in wrestling and a 2nd degree black belt under Paulson and Rigan Machado making him the perfect man to teach some high-level grappling techniques. Today, let’s look at his method of setting up a tight knee bar from an omoplata.

In combat sports like Brazilian Jiu Jitsu there’s only a certain level you can reach with technique. Beyond this point, everyone knows most of the high percentage moves, as well as the counters to them. This is the point at which you have to turn to strategy and tactics rather than just technical knowledge.

Once you reach an advanced level of BJJ (brown/black belt level) you have to start thinking about introducing trickery into your game. You’ll never be able to catch someone with a straight-on move that they see coming from a mile away. Not without really working for it at least! Instead, people at this level usually look to guide their opponent into traps that are well hidden with other moves.

The concept for expert-level trap setting in BJJ goes something like this: you start off by attacking with one of your best attacks. If it works, perfect, but against a high-level opponent, you’ll run into obstacles.  That’s fine, as long as you expect them.

This means you can position yourself wisely to create routes that your opponent thinks they can use to escape. However, you’ll be on the other side, hiding behind a rock and waiting with a shotgun. Or, in the case of the video above, hiding a slick knee bar behind an omoplata. 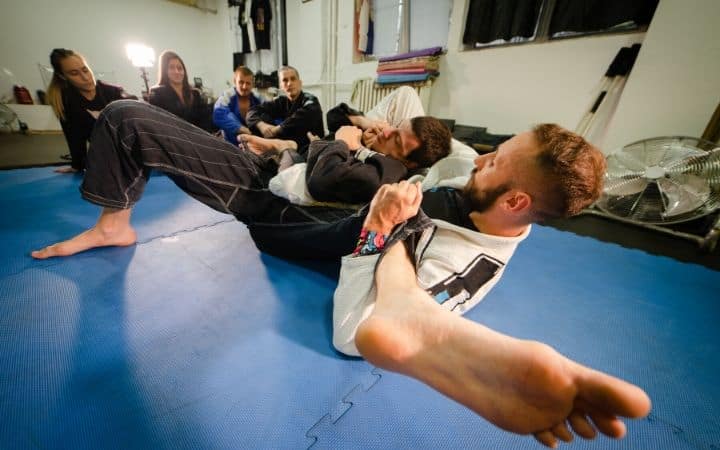 The Omoplata is a highly reliable attack simply because it has a few different endings. Of course, submitting someone with the original shoulder lock is the primary goal. However, when that doesn’t work, you can trap your opponent and move towards chokes or other armlocks.

The most common outcome is that an opponent counters or looks for an escape. This usually leads to high percentage sweeping options via the omoplata sweep.

In the video above, Ben Jones talks about people that try to roll out of an omoplata. This is a very common escape, and it happens more often than you might think!

Anticipating this escape means you can be ready to surprise your opponent as they roll. This is known as a transitional attack, and it is the reason rolling with a black belt seems like they’re reading your mind. They never wait for a position to settle, but instead, attack in while positions are in flux.

From a basic omoplata the rolling escape will always happen if you’re not controlling your opponent’s waist. When you’re setting a trap, you’ll actually remove your arm yourself. A key moment is turning your hips slightly towards your opponent when you sit up for the omoplata. That way, when they roll, your legs are in a perfect spot to set up a knee bar.

The trap itself springs into action when they roll. As they’re moving, you simply extend an arm to cradle the nearside leg. This will both stop the roll midway, and allow you to “bite” on the thigh with your knees. Ben uses the bottom leg to hook the hamstring, closing off any remaining space. The knee bar finish itself is the basic straight knee bar. 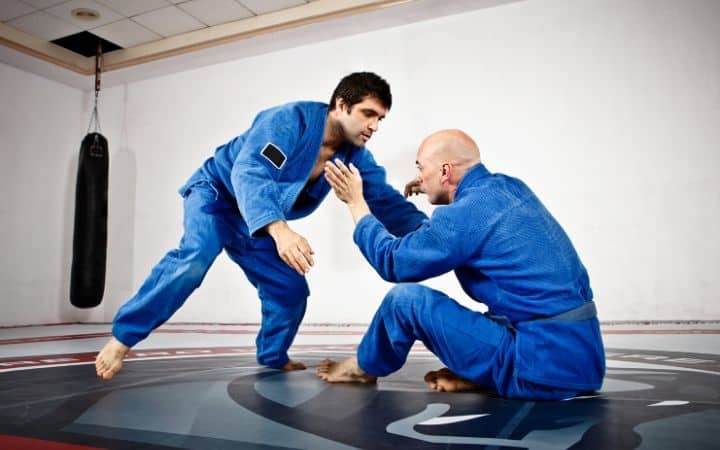 How Can We Make It Better?

Ben starts his attacking the closed guard, attempting a triangle, then an armbar and finally going into the omoplata. That’s three submission attempts already. The knee bar comes fourth, but there’s space in there to sneak another one before it: a toe hold.

Whenever you find yourself in an omoplata position, before you sit up for the finish you can always turn towards your opponent. What you’ll notice is that the near side leg is right there for a toe hold. If the opponent still decides to roll, the toe hold grip will make sure you get an even tighter kneebar. After all, the knee bar and toe hold are best friends, right?

Also, here is a hint to make the knee bar even tighter. Instead of just finishing the submission with a linear force, introduce a twist. What I mean is to twist your upper body as you push your hips in for the break. This puts the knee under tremendous pressure that’s extremely difficult to withstand. Finally, a follow-up option: think about transitioning into an Ashi Garami instead. Getting the 4/11 would be the perfect option, but given the way Ben sets it up, 50/50 is a more reliable and accessible position.

A Word Of Caution

This entire setup is a great one if you’re a brown or black belt. Since knee bars are not legal under the majority of rule sets prior to brown belt, you’ll need to exercise caution with this setup at lower ranks.

Feel free to train it and have it ready in your arsenal. However, when you’re competing, let people complete the roll so that you can transition to the omo plata sweep, which usually ends in S-Mount. Submission options are still going to be plentiful from there. Plus, you’ll know you had that sneaky knee bar along the way.