MMA Submissions Videos – What Are the Most Common and the Rarest Submissions?

“Stand them up!” As you’re enjoying a night of fights just hoping for some Jiu Jitsu to be displayed, that exclamation seems to interrupt the action. While everyone wants to see an exciting fight, the “stand them up” mentality equates ground fighting to boredom.

The “Lay and Pray” method of fighting (where a fighter holds their opponent in a secure position to recuperate) can make for a boring show. But, no one can deny Anderson Silva’s redemptive triangle against Chael Sonnen. Fans remember when Ronda Rousey made armbars trendy.

And, of course, Royce Gracie’s dominance of the early UFC with Jiu Jitsu helped bring BJJ to mainstream audiences. Although Jiu Jitsu in the academy is much different than in the cage, MMA has pushed BJJ to evolve into a more versatile sport.

There have been countless displays of Jiu Jitsu victories in MMA history. However, some submissions are more common, while others become instantly iconic due to their rarity. Below are a few of the most common and the rarest submissions in MMA.  Note that this is not an exhaustive list, but rather notable or iconic entries.

By far, the most common submission in MMA is the rear naked choke. While the submission is mechanically simple in Jiu Jitsu, it can be more nuanced to finish a tough opponent in a MMA context.

Back mount is already a powerful position. When a fighter achieves back mount, the rear naked choke is often an inevitable conclusion, especially when an opponent now has to defend punches as well.

While sweat can often make securing a submission more difficult, it is helpful in this case. As your opponent tucks their chin, the sweat makes it easier to slide an arm around their neck.

Although a fighter can grit their teeth through broken bones, the rear naked choke can create an inescapable snare that defies grit and blood flow. As Helio Gracie put it, “for the choke, there are no tough guys.”

While the guillotine does not provide the same degree of control that the rear nake choke does, it utilizes the same “anti-tough guy” principles as any choke.

What is unique about the guillotine, especially in MMA, is that many times an opponent might put themselves there, as opposed to falling prey to an elaborate setup.

In other words, a wrestler shooting for a takedown might leave their neck exposed to be snatched into a guillotine. Like the rear naked choke, the guillotine’s execution is fairly simple, but it has a greater degree of versatility, as it can be set up and applied from multiple positions.

You might find it comforting to know that one of the first submissions you learn in Jiu Jitsu is just as effective in world-class MMA. Casual fans of MMA might not understand all the intricacies of a Jiu Jitsu match, but everyone understands which way an arm should and definitely shouldn’t bend.

The armbar also provides a versatile range of setups and attacks from nearly every position in MMA. However, where a sweaty, erratic opponent might help you sink in a rear naked choke, an armbar can be more difficult to land on a slick opponent.

Despite the smaller margin for error, the armbar also isolates one of your opponent’s punching arms. Considering the devastating nature of the submission, a fighter can potentially end a fight instantly if they can successfully apply the armbar.

Named after veteran MMA fighter Jason Von Flue, his namesake submission has only been seen a handful of times in recent MMA history. The technique has gained cult status after being made famous by fighter Ovince Saint Preux who used it three times to gain victory.

Used infrequently, the Von Flue Choke is a technique that uses its mystique and rarity to its advantage. A fighter may feel so confident in their oft-practiced guillotine that they refuse to let go of the headlock, even if they are in an improper position to finish, such as bottom side control.

This is where the Von Flue Choke shines. The top side fighter locks in the insistent head lock with their own grip, then begins to apply shoulder pressure to their opponent’s neck. What results is a nearly indefensible choke.

The Von Flue Choke’s relative ease of application and rare use gives any fighter using it the element of surprise.

Armbars and triangle chokes dominate Jiu Jitsu in MMA. However, the third member of the Guard Godfather trio, the omoplata, is underutilized in MMA. The omoplata can certainly appear complicated, but if set up correctly, it can be just as efficient as an arm bar.

The omoplata can be thought of as a Kimura, but with your legs. However, it has only been utilized in the UFC twice. It is true, as with many submissions, that the omoplata is easier in a gi. But, without a gi, fighters can still use the attack as a powerful shoulder lock, or even a sweeping technique.

Like the armbar, a benefit of the omoplata is isolating one of your opponent’s arms, preventing some counterattacks. While applying the submission, the fighter is also off to the side of their opponent, away from their free arm, further safeguarding them from counterattack. 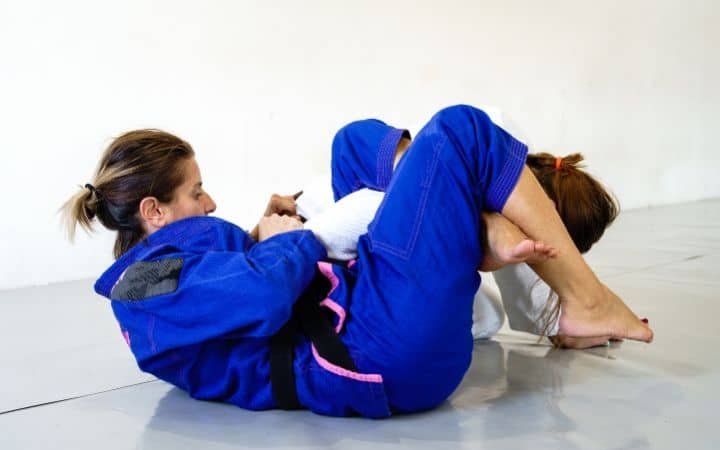 Once in the submission, the opponent has no choice but to go into full-on “escape mode.” For most people, the typical omoplata escape will be rolling forward and relieving the pressure on the shoulder.

Even when this attempt is successful, it sometimes means fighters are forced to place themselves in compromising positions such as bottom side control.

While you might see the omoplata represented in movies like Pacific Rim or Warrior, it is much more satisfying to see this rare submission in the cage.

Jiu Jitsu made a splash in the MMA world back in UFC 1 with Royce Gracie’s early victories. Today, Jiu Jitsu continues to be both a devastating component of MMA as well as a great equalizer outside of the cage.

Many submissions have become household names thanks to their common usage by celebrities like Ronda Rousey, Demian Maia, and Nate Diaz. However, other submissions have remained obscure in MMA.