Last updated on 15.03.2020 by Jiu Jitsu Legacy
Table of Contents show
1 Escape Or Counter? That Is the Question
1.1 The Side Control Escape that Beats the Crossface
1.2 Why It Works
1.3 Now What?

The bottom of side control is one of the nastiest positions to deal with in Brazilian Jiu Jitsu. Even with an unskilled opponent, escaping can be hard.

Then, there’s the pressure. If there is one spot where you can feel pressure, it is side control. Luckily, there’s a great side control escape by Chewy from Chewjitsu that’ll help you get out of even the heaviest side control.

Escape Or Counter? That Is the Question

When you are a beginner in Jiu Jitsu the question of escape or counter is only hypothetical. Instead, you’re just trying to survive, and there is a good chance you’ll neither escape nor counter. At least not at first.

With time though, you’ll find that side control is a very dynamic position. In BJJ, you can’t just hold side control the way you can hold mount. Whether you’re on top or bottom, you always need to be readjusting and re-assessing. That is both a good and a bad thing when you’re looking for an effective side control escape.

First, it is important to know that side control is not just one position as most people think. There are many variations that range from wrestling side control to North-South and everything in between. In each of these variations, people place their grips and distribute their weight differently. The dynamic nature of side control makes it difficult to escape.

In terms of getting out of side control, you have two options. One is to escape, which usually involves you going either in a guard or reversing and getting top position. Counter-attacking is a bit more complicated, involving attacks like the inverted triangle to tap an opponent out off of your back.

So, what is the best solution? Do you escape or stay in side control and try to mount a counter-attack? The answer is simple – do both. The method, though, is usually quite hard to determine. So, why not let your opponent do it for you? Whatever they choose to do, let them. The more pressure there is, the better a specific type of side control escape or counter is going to work. 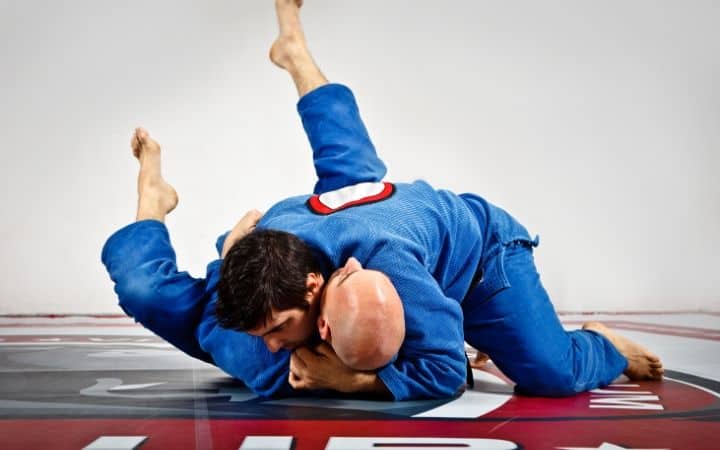 The Side Control Escape that Beats the Crossface

When it comes to side control escapes, the “basic” wrestling style side control is probably the hardest one to wiggle out of. There’s usually immense pressure from the person on top, paired with the fact you can’t find an inch of space when someone knows how to hold you down. The biggest problem comes from the crossface holding your head turned to the side.

First, forget about shrimping. A good, tight crossface will have you squirming if you try to rotate your shoulders. Instead, think about using your opponent’s crossface as your ally.

Every type of pressure has direction, and the crossface is no different. Instead of going against it, you need to go with it.

The steps of this escape are simple: create space, bridge, and roll. Space is relatively easy to create – push the opponent’s head and hips towards your own knees. Just remember to watch out for wristlocks when you push on the hips. Or better yet, Chewy recommends that you push directly with the side of your wrist.

The bridge is an integral part here, but it will only work if you can see the top person’s elbow. Only when their elbow is above your shoulder can you bridge to the side and send your opponent toppling over. A short roll later you’ll be the one on top, applying your own pressure from side control. 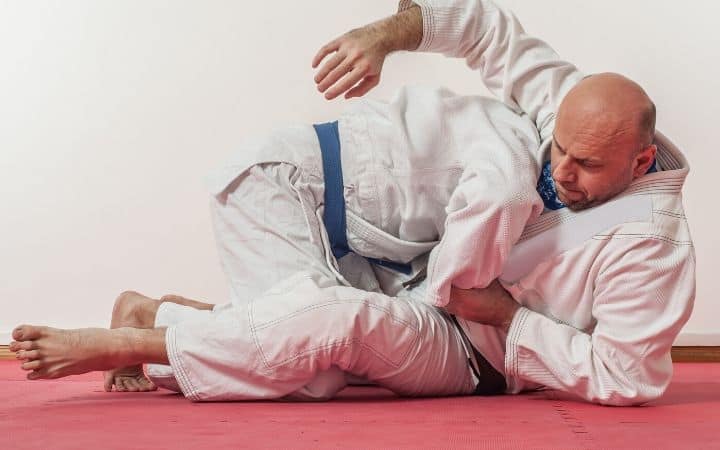 The method is simple – go with the pressure, not against it. Many side control escapes require you to turn into your opponent or push their hips away from you, both of which are easier said than done.

However, with this side control escape, you establish a good starting position (with the bridge) before you roll your opponent over.

To review, this technique relies on three movements and three principles. Create space, bridge, and roll. Go with the pressure, create an open elbow, and turn to your side.

Next time you train allow people to catch you in side control. This will give you opportunities to practice the escape! You might want to start with people of your own rank, before moving on to higher ones though as this technique requires practice just like everything else.