This is a fair question, it is one born from a desire to be a black belt in one of the most combat tested martial arts, showcased to millions in the form of the UFC, a question not to be knocked easily.

The Brazilian Jiu Jitsu community however normally scoff when people ask this question, because they know that very few people make it to black belt. BJJ is not like other martial arts. It can take up to 10 years (and in cases more ) to achieve a black belt. Furthermore, it does not only depend on attendance based assessment.

An average of 2 years to your blue belt, 3 years to your purple belt, 3 years to your brown and 2 years to your black making a total of 10 years. The time spent on each belt will be reflective of your dedication to the art, that is to say, the more time you put in the quicker you are likely to advance. Equally the more laid back you take your training the longer it will take to progress. Someone training 4 times a week for 2 years may need to wait longer to get their blue belt than someone training 10 times a week for 2 years. The actual physical training hours of Brazilian Jiu Jitsu typically translates to the amount of skill a person gains (other attributes count, such as strength, conditioning, athleticism and age).

Although some would say it’s foolish to estimate how long any one person will stay at anyone belt but collectively I think that a conservative estimate for time spent from white to Jiu Jitsu black belt would. 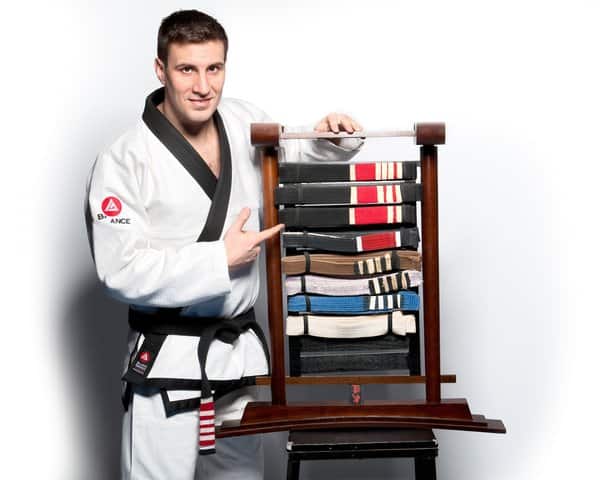 Now in Brazilian Jiu Jitsu if you start when you are 55 years old, your teacher cannot expect you to have the physical capability of a  25 year old. However, both can be awarded a blue belt in the same space of  time even though one person is greatly and  physically superior to his team member. Because it’s relative. Both people have had to overcome great adversity, both can display the appropriate techniques learned under a pressure tested environment. Although one outmatches the other they are assessed on individual merit relative to personal circumstance, ergo the same belt level in Brazilian Jiu Jitsu.

Some people may join, having trained in either judo or wrestling. Both these sports involve grappling at high level sporting events and as such produce outstanding grapplers. Having this background as you can image, would help you to progress to a black belt faster.

So how do you get your Brazilian Jiu Jitsu black belt? Train hard, train a lot and train smart.