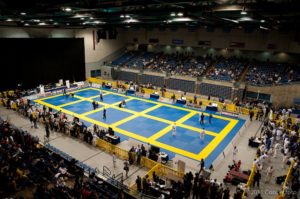 If you’re a beginner to BJJ you might be wondering what your coach and upper belts are talking about when they say they are preparing for the Pan-Ams, Euros, Mundials, Brasileiros, ADCC etc. We don’t blame you; you’re a beginner after all! That’s why we have prepared this short list of the most prestigious Brazilian Jiu Jitsu tournaments in the world; so the next time your teammates name drop one of these tournaments you’ll be able to jump into the conversation with no problem!

Check out our list below; we’ve split it into 2 categories: Brazilian Jiu Jitsu Gi Tournaments and No-Gi.

Most Prestigious Brazilian Jiu Jitsu Tournaments In The World

#1: IBJJF Mundials (Worlds)
Make no mistake about it, despite all the criticism, valid and otherwise, that has been levelled at the IBJJF over the years, the IBJJF Mundials still remains, in the eyes of the majority of BJJ practitioners worldwide, the holy grail of Brazilian Jiu Jitsu tournaments. Here are a couple reasons that this particular tournament enjoys such an excess of prestige over its counterparts, despite the word ‘Worlds’ in its name. First: there are no age divisions; that’s right in the IBJJF Mundials everyone is separated only by belt and weight. Second: beginning 2015, the IBJJF has begun requiring that black belts qualify to even enter the Mundials, which they can do by winning other IBJJF competitions or by being a former World Champion. This move was a long time coming and has only increased the prestige of this event.

#2: Brazilian Nationals (Brasileiros)
This might come as a surprise to many, who rank the IBJJF Pan-American championships right below the Mundials. However, the reason we are ranking the Brasileiros above the Pan Ams is because of the fact that there is plenty of Brazilian talent that cannot afford to fly out to California for the Pan Ams or Mundials, however most are able to compete in the Brasileiros; which is held in Rio de Janeiro at the famous Tijuca tennis club. Keen observers of the sport always look to the Brasileiros to identify up and coming Brazilian talent.

#3: The Pan American Championships
The Pan-Ams, as it is called, is usually held 2 to 3 months before the Mundials and is the major tournament to win to gain momentum prior to the Mundials. Being held in California, similar to the Mundials, it tends to attract a similar crowd although more decorated black belts, once achieving multiple World titles, tend to sit this one out.
#4: The Europeans
The Euros, for short, is held in January every year in Lisbon and kickstarts the beginning of the Brazilian Jiu Jitsu gi tournament season. While it is the newest of these four championships (winning them all in a single year is called a ‘Grand Slam’ by the way) it is currently the largest Brazilian Jiu Jitsu tournament by number of participants in the world, recently overtaking the Pan-Ams. Plenty of talent coming out of Europe these days, particularly from Poland and Scandinavia.

#1: Abu Dhabi Combat Championships
When it comes to the most prestigious of submission wrestling tournaments there is no doubt that the ADCC stands tall. With a 16 man bracket for each division, plus being the first tournament to offer prize money ($10k for each weight division winner and $40k for the absolute), participants have to win regional qualifiers to enter or be invited personally. Also, unlike the above tournaments, there are no closeouts; competitors from the same team will automatically be paired up in the first round.