Hi, my name is Robert. I am a Blackbelt from Berlin, Germany, and have competed in many tournaments organized by different organizations all around the world this year. All of them were amazing experiences as 2019 was a fairly successful year for me! For the last tournament of the year, I chose the UAEJJF Dubai International Pro Jiu-Jitsu Championship.

In order to attract a large number of international competitors at all levels, the federation gave away 150.000 AED (roughly $40.000) in price money.

For the upcoming tournaments of the season similar and larger amounts will be awarded regularly as incentives for competitors to join.

I arrived a few days before the competition to beat jet lag and use the time to visit museums, amusement parks, malls, the beach, aquariums and to have a bbq with my Brazilian friends who had moved to Dubai permanently to teach Jiu-Jitsu here.

JiuJitsu is a small world, very happy to be able to receive a great friend in my house. Thanks @robertnestorbjj for visiting us and thank you for 3 years ago you have been opening the doors of your gym when I needed it most. Brother you will always be welcome here my home, my home is your home ???

During this time of being a tourist, my impression was mainly: Dubai is a fantastic travel destination, a city of superlatives, that is larger, better organized, and more advanced in anything it offers compared to what I had seen before.

Here you can ride a waterslide at the waterpark through a pool filled with real sharks and hundreds of other species of aquatic life, to just give an example.

My expectations as a tourist were surpassed at everything I explored.

The signup was a very easy process on the uaejjf events page. Membership fee is free and the tournament fee (roughly $70) can be paid by PayPal or credit card.

A list of competitors is online in real time as well as non-paid sign-ups. Most competitors signed up in the last weeks before the tournament and single brackets were put together after weigh in.

Arriving at the tournament by metro, my first impression was the sports clubs large scale and its organized manner. Large signs directing the competitors to the gymnasium into the registration- and weigh-in areas. 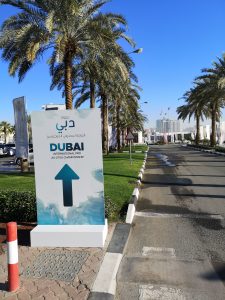 Weigh-in time was from 8:00am to 10:00am and was handled in a very speedy process. The large amount of high tech used here caught my attention immediately. More than 8 scales connected to computers would register the competitors’ weight and enter it into the system.

The matches started on time at 11:00am as announced.

After the weigh-ins, the brackets, mat schedule, and your personal next-match-time were posted on the uaejjf’s website and updated in real time to either check out on your phone or on the large screens in the 2 spacious warm-up areas. One for male and one for female competitors.

The venue itself was set in a very professional manner. An enormous number of staff members around the venue ensured a smooth and organized competition day. One of the first things that caught my eye was the many large television cameras and the main mat’s camera crane, followed by the media area that I had previously only seen in sports coverage on TV. 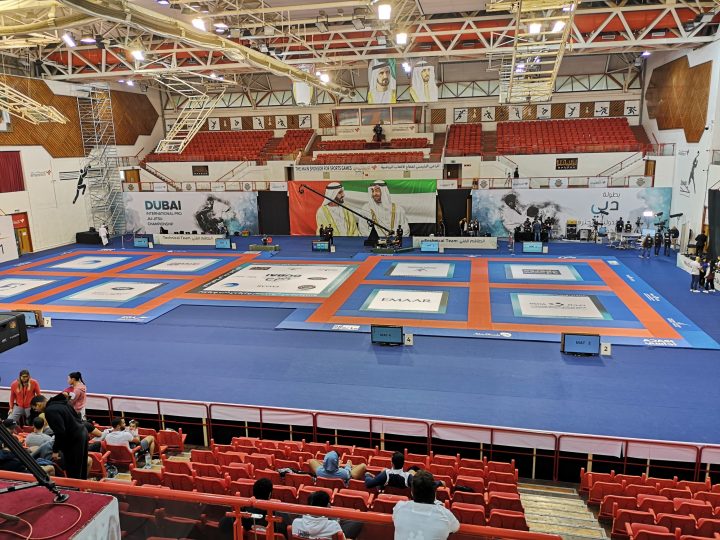 9 mat areas, each equipped with large screen scoreboards and video devices live-streaming every match on YouTube, built the center-stage of the competition day. The large spectator area was filled with competitors’ family members, coaches and team members screaming out their advice to the athletes on the mat.

A food truck as well as coffee and snack vendors took care of one’s culinary needs, and a merchandise stand ensured the proper lifestyle advancement.

A professional medical team was mat side, watching over the well-being of the competitors. The large media team ensured that pictures, videos, highlights and other content was promptly shared on social media and an even larger technical team was responsible for the tournament process in connection with the referees and the other teams.

Here was Dubai again; outscoring what I had witnessed before at other competitions. The sheer amount of staff, high tech communication and sync between different departments at this competition was very impressive.

In the warm-up area I noticed a high amount of blackbelts as well as an international mix of competitors of all belt ranks blue to black as there were no whitebelt divisions.

The amount of female competitors was much higher compared to other tournaments I had participated in. Female athletes seemed to be well represented and given much attention.

Free water was distributed in the warm up area to all competitors.

Once my division was called we went to the catacombs behind the mat area to be called to our individual mat the instance the preceding match was over. A very organized, spectator-friendly process that makes you feel like a professional sports athlete.

The 1st, 2nd and 3rd placed competitors, decided by a final and a match for third place, after being called to the podium on red carpet, were then congratulated by a group of federation and government officials and received their beautiful medals.

The backdrop of the podium represented the tournaments many sponsors and again gave an extraordinary flair to the already professional experience.

My podium picture and the official results were online before I reached my phone.

Dubai International Pro Jiu-Jitsu Championship 2019 Amazing week here in Dubai! I leave with more knowledge about this part of the world thanks to Jiu-Jitsu. My mind is blown. This for sure is one of the most impressive tourist destinations I have ever seen. Thanks to @jiu_jitsu_legacy for making this trip happen! Thanks to @gersoncuringah for the hospitality, opening his home to me and showing me around the city. Muito obrigado!!! Competition year 2019 is officially over and I am still missing the words to describe what happened these last 12 months. Now I will gather my thoughts and emotions over the holidays and enjoy time with the family. Open mat marathon here we come! . . . #bjjakademieberlin #millhillbjj #apexjiujitsu #bjjslovakia #bjjfamily #uaejjf #dubai #bjj #bjjmeme #bjjberlin #bjjcampfinder #okamiwintercamp Thanks for the ongoing support @sloth_jitsu @mataleao_13 @dima_murovanni @annacellysbjj @plamen989 and everybody else that gives me hell on the mat day in and day out! Without you, I would not be here today!!!

To sum things up, this competition seemed like anything else I experienced in Dubai; trying to outdo all other tournaments I had previously participated in, in every aspect. It was a great pleasure to be part of something of this professional scale and magnitude.

From a competitor’s viewpoint who likes to travel, I can highly recommend you check out the UAEJJF’s website and plan your next Jiu-Jitsu competition trip.

You won’t be disappointed.