Last updated on 16.03.2020 by Jiu Jitsu Legacy
Table of Contents show
1 Who are the BJJ Globetrotters?
1.1 What is the IBJJF?
1.2 The serious side of the IBJJF ban
1.3 Globetrotters just want to have fun
1.4 Summary

The general order of things in the world of Brazilian Jiu Jitsu (for most people) is this: BJJ Globetrotters offers a fun approach to Jiu Jitsu and the IBJJF does not. However, we got used to having both organizations peacefully coexisting, and for a while there, things were going great. Well, the last few days have certainly been eventful, after an IBJJF ban broke the peace!

Full Disclosure: The author and some members of the JiuJitsuLegacy editorial team are members of both the IBJJF and BJJ Globetrotters. However, if asked to pick sides, all of them would choose Globetrotters without hesitation. Attempts have been made to remain neutral – but it’s hard to divorce ourselves from our biases. 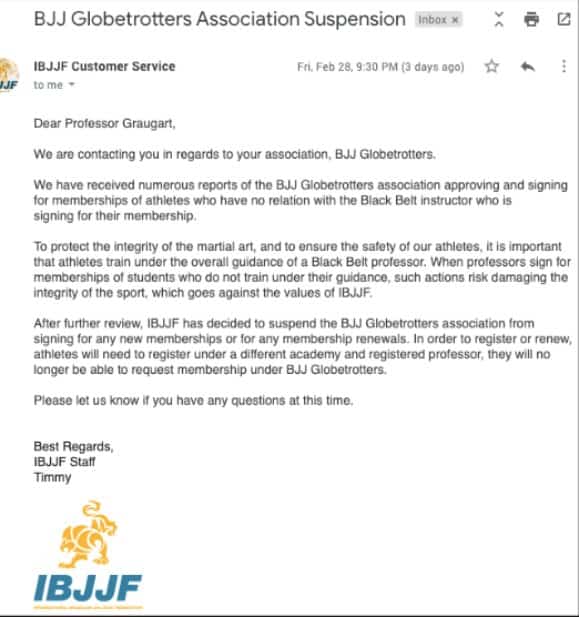 Who are the BJJ Globetrotters?

BJJ Globetrotters is a community of people that like to put BJJ above anything else. They don’t care about affiliations or politics. For them Jiu Jitsu (and having fun) takes precedence over everything else. As such, they’re a real breath of fresh air for the entire Jiu Jitsu community.

The man behind it all is Christian Graugart, a black belt who’s own worldwide BJJ journey prompted him to create one of the sport’s most massive modern movements. Make no mistake, even though the BJJ Globetrotters are laid back and like to party a lot their Jiu-Jitsu is at an extremely high level.

What’s the difference between their instructors and every other instructor in the world? They couldn’t care less about exposure. Of course, they have the odd DVD or two, but for them, it’s all about doing BJJ, innovating, and teaching people everything they know at the BJJ Globetrotters camps. Speaking from experience, they hold nothing back.

What is the IBJJF?

The IBJJF or International Brazilian Jiu Jitsu Federation is a for-profit organization that hosts competitions internationally. It is the largest of its kind and considered to be the de facto governing body of Jiu Jitsu, although that status is far from official. In any case, they’ve been around longer than anyone else, and medaling in their competitions is one of the most prestigious victories one can have in BJJ.

The way the IBJJF operates is pretty complicated though. The basic idea, of course, is predicated on making a profit. That said, they provide a great platform for competition, organizing hundreds of events every year across the entire world. What athletes get in return, though, is nothing more than a shiny bauble (if you win!).

To compete in the IBJJF you have to first pay to register with them. Then, you need to pay the fee for whichever competition you decide to go to. What’s important to recognize is that you can’t compete if you’re not registered under one of the affiliations, organizations, or clubs that the IBJJF recognizes. In order to be recognized by the IBJJF, clubs must pay an annual fee to the IBJJF.  This can be a real nuisance, not to mention a financial burden, for people that just want to compete. Plus the rule set is highly restrictive and considered by some to be outdated.

Thankfully, the BJJ Globetrotters had figured out a solution for those people who wanted to compete but weren’t part of a registered affiliation. Not only did they offer a platform to register under, but they also offered this service for free. Or, they did until they received an IBJJF ban at the end of February 2020. 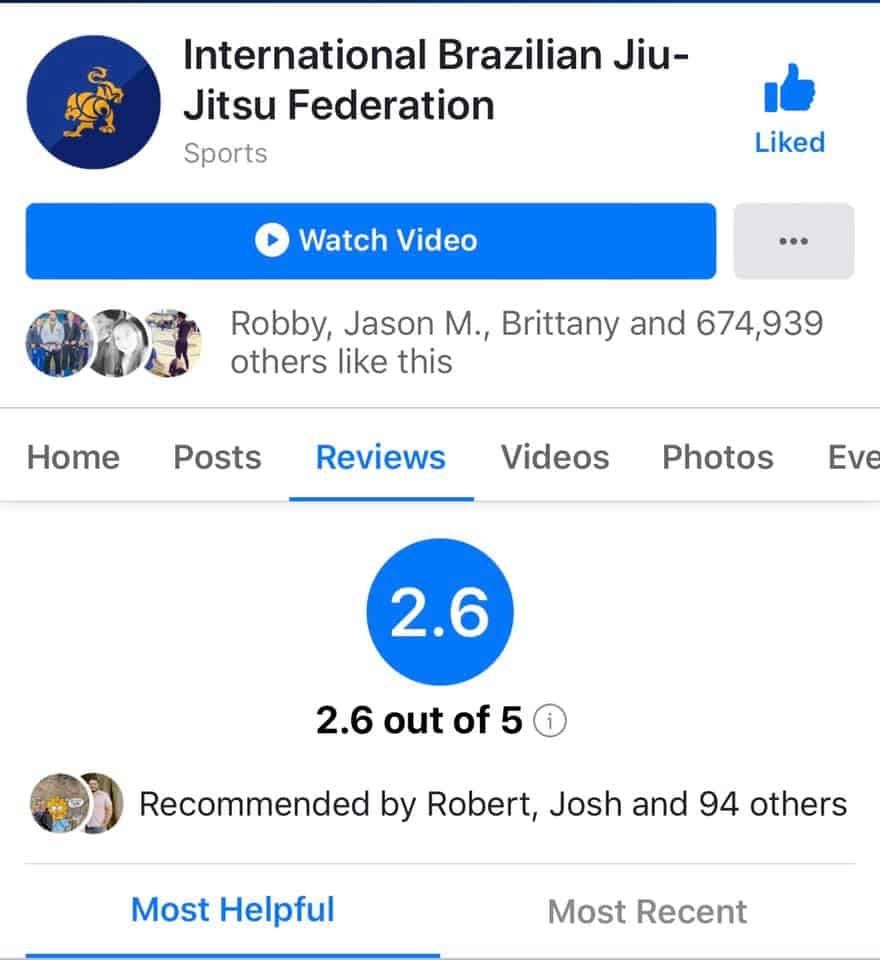 The serious side of the IBJJF ban

Such a move by the IBJJf shows how unwilling it is to move away from concepts that are quickly becoming outdated. It is clear that having the BJJ Globetrotters allowing people to compete under their banner for free, without existing within the usual structure of affiliated academies, did not fit the IBJJF business model.

This likely doesn’t represent a shift in the IBJJF’s mentality; it simply didn’t have the exposure before. Now that the word is out the BJJ Globetrotters community, which numbers in excess of 20,000 people, isn’t take things lightly. In a matter of hours, the IBJJF’s Facebook rank fell from 4.5 to 2.6 and is still falling fast.

This deluge of negative reviews caused Facebook’s algorithms to temporarily disable new reviews. Some people believed that this was the IBJJF’s choice, which led to further outrage. However, as of the time of publication, the IBJJF’s Facebook review score is still visible which means that they have not disabled reviews for their page.

It turns out that the BJJ Globetrotters had a far greater reach than the IBJJF realized. The ban may ultimately affect the IBJJF in ways they never thought possible. 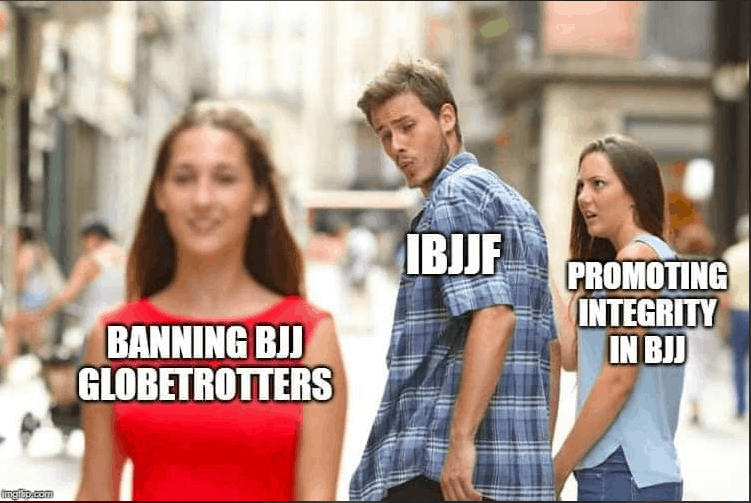 Globetrotters just want to have fun

On the funnier side of things, the BJJ Globetrotters members expressed their rage in their unique and unusual way. Of course, there was the odd nasty comment or meme, but most of the protest was actually funny! Well, funny for everyone except the IBJJF.

For example, some Globetrotter took over the IBJJF’s Wikipedia page, changing their opening paragraph to a much funnier, albeit realistic description. 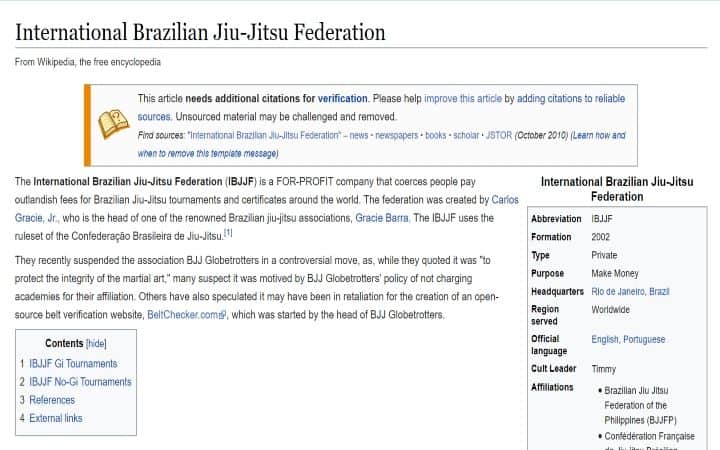 Moreover, the influx of memes on social media has been nothing short of astonishing. Of course, they are systematically destroying the rating of the IBJJF too, while making some witty comments along the way.

To make things more interesting, Graugart is actually trying to maintain the peace by asking BJJ Globetrotter members to act civilized as they express their anger.

This is probably a great time to mention that recently Graugart revolutionized how people can confirm they really have a certain belt. His newest project, BeltChecker.com, employs a form of transparent crowdsourcing to verify an individual’s rank. The IBJJF Globetrotters ban offers some insight into what the federation thinks about Christian’s latest project.